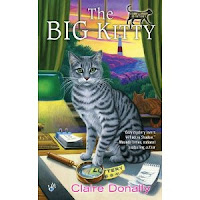 I had just gotten this book and couldn't resist reading it right away. The big kitty on the cover drew me in, but as I opened the book, I hoped I wasn't going to be meeting a talking cat. Luckily for me, Shadow doesn't talk to humans, but we find out what he's thinking through our omniscient narrator, the author, who tell us all.

Shadow was an independent cat, who came and went as he pleased, fed and housed by a Cat Lady who owned dozens of other cats. When the cat lady Ada is found dead at the bottom of her basement stairs, a new person comes into his life - Sunny, a young woman whom he follows home and who takes him in, in spite of her elderly father who tries many times to get rid of him.

Nevertheless, Shadow becomes a big help to Sunny, a part-time reporter, and helps in her investigation of the cat lady Ada, whose death is ruled a homicide. Ada had let everyone know that she had misplaced a winning lottery ticket worth six million dollars and was searching for it. Several people in the small Maine town had good reason to want that ticket.

The big kitty saves Sunny's life at least once during her investigation, and so becomes one of a team of two - amateur sleuths in this first in the new cozy series. It's a cute twosome and a clever play of words in the name -Sunny and Shadow.

Sunny's personality and Shadow's silent but intriguing point of view make the cozy worthwhile, though I found this story lagged in the second half.  I am looking forward to the next in the series!

I received a complimentary review copy of The Big Kitty.
at April 14, 2012

I think this sounds like a good start to another cozy series. I like it when animals are involved...I'm weird!! LOL!

This does sound like a lot of fun, and seeing that I am a cat lover, this sounds like a book I would enjoy. I am so glad that you liked it and that it was such a good read for you. I will be looking for it as well!

I'm also a fan of cats, and this sounds like a sweet mystery. Very nice review!

This description for some reason reminds me vaguely of the "cat who" series. Not sure why. Sounds very cute though, will have to keep my eye out for it.