In The Shadow of the Banyan by Vaddy Ratner

It's Monday, What Are You Reading? This Monday meme is held by Sheila at Book Journey. Tell us what you are reading or plan to read during the week. 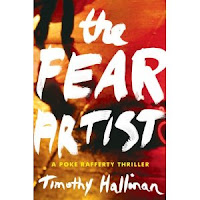 I'm reading and enjoying the ARC of The Fear Artist by Timothy Hallinan, a Poke Rafferty thriller set in Thailand, sent to me by the author and to be released by Soho on July 17, 2012.

Publisher's description: "An accidental collision on a Bangkok sidewalk goes very wrong when the man who ran into Rafferty dies in his arms, but not before saying three words: Helen Eckersley. Cheyenne. Seconds later, the police arrive, denying that the man was shot.

That night, Rafferty is interrogated by Thai secret agents who demand to know what the dead man said, but Rafferty can't remember. When he's finally released, Rafferty arrives home to find that his apartment has been ransacked. In the days that follow, he realizes he's under surveillance. The second time men in uniform show up at his door, he manages to escape the building and begins a new life as a fugitive.

As he learns more about his situation, it becomes apparent that he's been caught on the margins of the war on terror, and that his opponent is a virtuoso artist whose medium is fear." 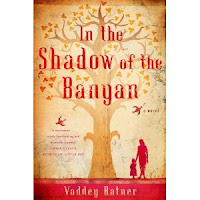 There is an author who has written a novel based on her experiences in Cambodia during the war,  In the Shadow of the Banyan by Vaddey Ratner, published in 2012.  A literary work of poetic, lyrical beauty, this novel is based on the real experiences of the writer as a child living through the time of the Khmer Rouge in Cambodia. I was overwhelmed by the beauty of the writing, the author's use of poetic words and descriptions to tell this story of survival, loss, and emotion.

The book has received wide recognition and won numerous awards; details are on the author's website: http://www.vaddeyratner.com/banyan/

From the publisher's description:


"For seven-year-old Raami, the shattering end of childhood begins with her father returning home in the early dawn hours bringing details of the civil war in the streets of Phnom Penh, Cambodia’s capital. Soon the family’s world of carefully guarded royal privilege is swept up in the chaos of revolution and forced exodus.

Over the next four years, as she endures the deaths of family members, starvation, and brutal forced labor, Raami clings to the mythical legends and poems told to her by her father. Raami fights for her improbable survival. In the Shadow of the Banyan is testament to the transcendent power of narrative and a brilliantly wrought tale of human resilience."

Both these books are highly recommended.
at April 23, 2012

Email ThisBlogThis!Share to TwitterShare to FacebookShare to Pinterest
Labels: Book review, Fear Artist, I'ts Monday, In the Shadow of the Banyan, Vaddy Ratner

A thriller set in Thailand sounds very exotic! Each of these books sound very good, Harvee. Enjoy your reading.

The Fear Artist sounds riveting. I love mysteries and the Thailand setting adds an exotic, intriguing aspect. I'm looking forward to your review!

I'm crazy about SoHo Press! They sent me the latest winner of the Oe prize, just recently translated into English, titled The Thief. I'm trying to save it until the Japanese Literature Challenge 6 beginning this June, but...

I, too, want to read In The Shadow Of The Banyan. If I can stand the violence of Cambodia.

I'm looking forward to reading your review of the second book. I know next to NOTHING about the Cambodian war and life.

In the Shadow of the Banyan sounds really good. I'll be on the look out for your review!

I am hoping to get the chance to read In the Shadow of the Banyan very soon. I hope that we both enjoy it!

Another author I like that writes about Thailand is John Burdett, but I definitely want to check out this series!