Book Review: In My Father's Country: An Afghan Woman Defies Her Fate 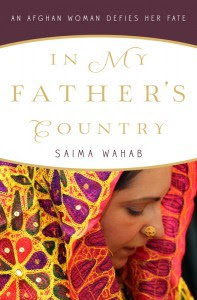 Saima's father was taken away from the village by the KGB and killed when she was age three. In 1979 she left Afghanistan at age six when the Russians invaded, and since coming to the U.S. at age 15, has returned to Afghanistan many times as an interpreter for the U.S. Armed Forces and in 2007 as research manager of the army's Human Terrain Team. Her job was to help the military tackle the language barrier and lack of knowledge of the region's history and to give crucial cultural recommendations. During her many trips to Afghanistan, she also reconnected with her extended family in her mother's village.

Comments: I was amazed by Saima's bravery in breaking away from her uncles in Portland and becoming a virtual outcast from her family.  Her unique gift and accomplishment as a fluent Pashtun-English translator made her valuable as an interpreter and cultural advisor. This has given her what she most wanted ever since childhood -  freedom and independence as a woman in both her Afghani and American worlds, and she fights still to improve the lives of restricted Afghani women.

The author talks about another important goal for working in Afghanistan. She wanted to find out what it was about the Afghanis that made her father give up his life for them. Another amazing thing about this book was how her writing made everything clear and easy to understand - Saima's personal life and goals, the differences in her ethnic culture and Western culture, the needs of the U.S. Armed Forces in Afghanistan to work successfully with the Afghanis. A compelling book on several levels, I recommend it to those interested in the fight of women in traditional societies for a better life and individual freedom and for those interested in the culture and politics of Aghanistan.

SAIMA WAHAB is Afghan-born, fled to Pakistan as a refugee, and moved to the United States as a teenager. She is one of the only Pashtun-English female translators in the world and, among other consequent roles, has returned to Afghanistan to work as a cultural adviser with the U.S. Army. A former resident of Portland, OR, Saima now lives in the Washington D.C. area.


For a list of all the book tour stops sponsored by TLC Book Tours, and other reviews of the book, visit TLC Book Tours: In My Father's Country blog tour.

Thanks to TLC, the author, and the publisher for a complimentary review copy of the book.
- May 07, 2012