Welcome to the Sunday

It's been a while since I've been to my second favorite city after Chicago  - Toronto. Not only the wonderful variety of foods, but a chance to catch up with friends and relatives.The Toronto Hakka Conference begins today but since I'll be here only a short while, I've decided to visit with family instead of going to the two-day conference.

The Chiness of Hakka origin (don't ask me what that means right now; it's complicated) are exploring their roots and history and culture. There will be a ten course Chinese banquet to wrap up the conference that I'll attend, however, with dancing to lively calypso, soca, "jump up", reggae, and other Jamaican music (don't ask me right now why this kind of music; that's also complicated.)

I am reading an ARC of Spencer Quinn's new Chet and Bernie mystery, A Fistful of Collars, a mystery that won't be released until Sept. 11, 2012 so I'll hold my comments till then but I do want to say, it's making me chuckle and smile as I read along. Chet is the one with the black head and two pointed ears, and his pal Bernie sits next to him. They make a delightful duo of detectives. 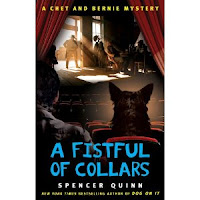 I'm also listening to an audio book while on the road, Flowers for His Funeral: A Mitchell and Markby Mystery,  a 1997 book by Ann Granger, one of my favorite female mystery novelists. Someone is killed at the Chelsea Flower Show in a most unusual and "sneaky" way. Flowers and mystery - just my kind of thing.


That's all for now! It's a beautiful and mostly sunny day in Canada. Hope the weather's good where you are!

Enjoy the ten-course feast, and your time with family. And your books, too, of course!

I'm going to Toronto July 12-21 for a Dostoevsky course offered by Classical Pursuits. All that to say I like Toronto better than Chicago! What a city, filled with murders, crime and graft. Hmmmm, and our President came from here? But, I digress...

I'm excited to see you're there, visiting family and perhaps attending some days of a conference. We'll have to talk when I come back at the end of July and see how our respective vacations were. I'll be thinking of you while I'm there, with my Canadian mother.

Have a fabulous time, and it's always good when a book makes us chuckle.

Sounds like you'll have a wonderful time. Hope you're there to see the Canada Day fireworks - I bet they're beautiful on the waterfront!

Toronto is one place that I want to visit this summer!! The books you're listening and reading sound great!!

Oh, I hope you have a wonderful time, and that you get to dance and listen and experience everything with joy. Your books for this week sound rather entertaining and light. Just perfect for this time of year!

Toronto is definitely on my travel bucket list. I hope you have a great time!

Jason and I took a short trip to Toronto when we were living in Lansing and loved it. Beautiful city.