"But I thought he had felt like so many men had, that the only end to their suffering would be death, and home seemed so very far away and unreachable." (ch. 19)

About the book: This is the fourth in the Bess Crawford Mystery series, featuring a WWI nurse from England who plays amateur sleuth. In 1918, Bess travels to France to care for wounded soldiers as well as the many soldiers stricken by the Spanish flu epidemic. At the beginning of the book, Bess is shown the body of Major Carson, an old family friend, lying among the flu victims.

Bess realizes that the major's neck has been broken and that he must have been murdered.  When Private  Wilson is found hanged and his death declared a suicide, Bess knows she has two mysteries to solve. She wants to help the wife of the Major and also clear the name of Private Wilson, who she thinks fell victim to foul play. She also has to discover if the deaths are connected.

My comments: I enjoyed A Bitter Truth, the previous mystery in the series, and thought this novel is as good in plot and characterization. It also gives a good sense of the horrific conditions of the wounded and the war and the work the nurses did to aid the doctors on the WWI battlefront.

The descriptions of the maimed, the dying, and the dead for me was overwhelming, and I had a deep sense of sadness and discomfort reading about it throughout the book. I would have liked some contrast in the novel, some descriptions of nature, for instance, that would periodically lighten up the dreary atmosphere. In other words, the novel wasn't pleasant to read, even though the plotting was flawless. 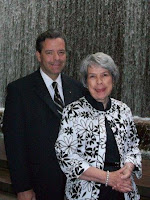 Charles and Caroline Todd are a mother and son writing team who live on the east coast of the United States. Caroline has a BA in English Literature and History, and a Masters in International Relations. Charles has a BA in Communication Studies with an emphasis on Business Management, and a culinary arts degree that means he can boil more than water.


For other reviews of An Unmarked Grave, visit the Blog Tour Schedule. The authors can be reached at  http://charlestodd.com/homepage/or on their Facebook page.
Thanks to TLC Book Tours and the authors/publisher for a complimentary review copy of  An Unmarked Grave.


Submitted to the War through the Generations: WWI Reading Challenge
at June 19, 2012

A nurse who plays sleuth? Very interesting! I am not much of a mystery buff but I must say, this series does sound different and more to my liking than say... just a straight murder mystery.

I can only imagine how they dealt with things out in the field during the war. Very sad!

I'm not surprised the novel is so dreary, but I know what you mean about wanting a bit of lightness.

We've got you on the participants page on War Through the Generations, and we'll get your review featured soon.

Hmm yes sometimes if a book is too dreary it can get you down. Sounds interesting though.

I really need to get to read the first book in this series!

I can imagine life at the battlefront was simply horrendous ... I'm certainly glad that I can't actually picture what went on there.