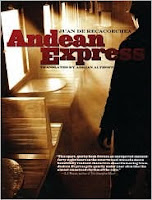 I read this library book in June 2009 and wrote the following comments on Goodreads. I thought I'd reprint it for selfish reasons. I hope to have every country on my Flag Counter visit my blog, at lease once. No one from Bolivia has visited my blog site, at least not recently. de Recacoechea is one of their best known novelists.

My comments on the book: I gave this mystery novel 3 1/2 and would probably have given it a four if I could have read it in the original Spanish! Some things are often lost in translation!

The train ride from the bowl of the city of La Paz, Bolivia up to its rim, across the stark and dry plateau, and then down to the coastline of Chile was the highlight of the book for me. Descriptions of the scenery, the sunsets, the people, and the few lonely homesteads on the plateau, were very interesting. I once flew over the Andes on the way from Brazil back to the U.S. and ofen wondered what it was like down below.

Also, relationships among mestizos, Indians, and Europeans in Bolivia are revealed on board the Andean Express. Granted this train ride was set some 40 years ago, I believe, and there is a hint in the novel about pending social change by a new political party.

The plot followed the general scheme of Murder on the Orient Express and other mystery train rides, but this "noir" novel is not a traditional mystery. Alderete has married a young woman from the upper social classes in Bolivia. It's an arranged marriage. Alderete is hated by close to a dozen people on the train, including his reluctant bride. A young high school graduate traveling to Chile to meet his parents witnesses the interactions and is used as an unwitting pawn in the developments.

About the Author: Juan de Recacoechea was born in La Paz, Bolivia, and worked as a journalist in Europe for almost twenty years. After returning to his native country, he helped found Bolivia's first state-run television network and dedicated himself to fiction writing. His novel American Visa won Bolivia's National Book Prize; was adapted into an award-winning film. Adrian Althoff is a freelance journalist and translator based in La Paz, Bolivia and Washington, D.C.
at July 03, 2012

This is a book that I have never heard of, and it sounds excellent and like something that I would love. I haven't read many books that would be categorized as noir mysteries, but this one whets my appetite. Thanks for the outstanding review, and for bringing a little attention to this interesting read. Great review today!

I'm going to look for this. I've never read anything set in Bolivia and one of my family members was born there!

Wow! If it were not for this post, I would have never known this author, really! I will be on the look out for this one :)

I thought you did a nice job highlighting the salient aspects of this book. It is noir, it's not really mystery, it doesn't feel like mystery, and it's a compelling introduciton to Bolivia for those of is who have never been there. I would guess that having worked outside his country for years sharpened the author's eye for it once he returned.
===========================
Detectives Beyond Borders
"Because Murder Is More Fun Away From Home"
http://detectivesbeyondborders.blogspot.com

Seems like a story I've read before, but the description of the alto plano and the high Andes train ride brought back so many memories. Worth the read.

This is a fine book. It's not amazing, but it's certainly not bad. If you're into the Noir/mystery scene this could fall into either of those categories, but the ending is a bit light.

An enjoyable short read. One doesn't even realize it is a translation from the Spanish, it flows very smoothly into "American". It is amazing how the author transports you into the 50's, but he does it easily. The train ride through the alto plano with all the characters is well worth the trip with even a murder mystery thrown in! The mystery is who out of everyone who hated the victim hated him the most to murder him. A tale of times and attitudes gone by.