Sunday Salon: Mystery Novels and a Few Other Books

Welcome to the Sunday

I've been in the mood for good thrillers and mysteries lately.

I've posted a review of The Fear Artist: A Poke Rafferty Mystery #5 and really enjoyed the book and the setting - Bangkok, a city where I lived four years in the early 1980s.

Spencer Quinn's ARC of A Fistful of Collars: A Chet and Bernie Mystery is a clever series which features the man and dog detective duo.

Another new thriller I'm reading is Ridley Pearson's The Risk Agent, a novel about business and government corruption, set in modern Shanghai.

On a different note, here are a few other books I have on my list for variety: 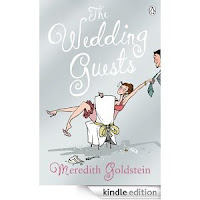 The Wedding Guests by Meredith Goldstein, described as


One wedding. Five nightmare guests. Five ways to ruin the happiest day of someone else's life:
- Cry uncontrollably over your ex in front of the bride and mix calming herbal remedies with copious amounts of alcohol so that it's hard to stand up - especially if you're a bridesmaid
- Dress like you are attending a funeral and look for opportunities to re-enact scenes from steamy novels
- Turn up late wearing a T-shirt covered in mud and something that looks like blood
- If you are the bride's uncle, who no one likes anyway, try to cop off with her friend who's way too young for you
- Wear a suit that stinks of chicken wings and then spend the whole reception propping up the bar. Who said going to a wedding solo couldn't be fun?

Also,
Skios: A Novel by Michael Frayn. "The master of farce turns to an exclusive island retreat for a comedy of mislaid identities, unruly passions, and demented, delicious disorder."


Keeping cool during these hot days? I'll be indoors watching tennis today. How about you?
at July 08, 2012

Definitely watching the tennis too. They're closing the roof as I type. Awesome match so far!

I've been reading a lot of good rom susp lately :)

I've heard that whole series by Spencer Quinn is good!

I don't know any of these! I'm reading a lot of "thrillers" at the moment (between quotes because the two I read most recently weren't very thrilling). I love a good thriller that makes me compelled to keep reading!

I really liked The Risk Agent (http://manoflabook.com/wp/?p=5498), looking forward to your review.

I am a sucker for a good mystery, crime or thriller story, so all three of your choices sound good to me.

Just a few more for my reading list, which is now so long that I will soon be able to paper the walls of my office with it. At least I will be able to read the book titles and authors, as I am never going to live long enough to read the books themselves !!!

I assume the tennis you are talking about is Wimbledon. I didn't see the match as we were out working on a rare day of sunshine here in the UK. We did keep up to date on the mobile though and cried along with Andy Murray when he lost!

Not familiar with any of your books. Hope you enjoy them.

I got "The Wedding Guests," too. It's not my usual kind of book but it looks like it could be a fun summer read.

It sounds like you're on a reading roll! Have a good week.

Chet and Bernie sounds cute to me...I've been seeing it around lately so I might have to check into this series!

This Is How I Save My Life by Amy B. Scher: First Chapter, First Paragraph