Book Teaser: The Roots of the Olive Tree by Courtney Miller Santo 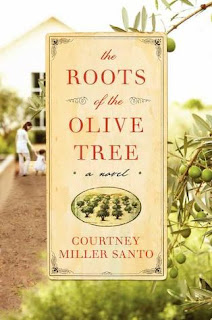 "What's wrong with letting her believe in the olives? Neither of you can say that the olives had nothing to do with your remarkable health. You don't believe that they have kept you younger than your years, but that's not to say that they haven't." (ch. 7)


About the book: Set in a house on an olive grove in northern California, The Roots of the Olive Tree brings to life five generations of women--including a 112 year-old matriarch determined to break all Guinness longevity records--the secrets and lies that divide them and the love that ultimately ties them together. (Goodreads) The novel also has a geneticist who stirs up the hornet's nest, so to speak, as he unearths secrets while probing into the lives and history of the family.

Email ThisBlogThis!Share to TwitterShare to FacebookShare to Pinterest
Labels: Teaser Tuesday, The Roots of the Olive Tree, women's fiction

This sounds like a great book, I love stories that span different generations.

I love olives, so I'd be ecstatic if they were near-magical! Thanks for sharing!
http://universeinwords.blogspot.co.uk/2012/08/teaser-tuesday-life-knocks.html
Juli @ Universe in Words

Sounds interesting. Thanks for sharing.

Great teaser...I loved this book. Hope you're enjoying it, too.

What an interesting teaser! Seems like a great read....

My tuesday teaser is from The Accused by John Grisham

This is a definite book for my wishlist. I love books which span the generations. To read about the interactions between the various characters, especially when they are family, is always illuminating, as I guess that I can always see something of my own family traits somewhere along the way.

They do say that olives are very good for you, not that I have any expectation of living to 112, as a result of using them.

By coincidence, my latest 'New Author' post, also has a book with olives in the tile!!

The setting in northern California and the multi-generational characters, along with your teaser, all make me want to read this book. Great post.
My Teaser today is from LEAVING SERENITY.

Sounds like a really good book! Thanks for sharing it!

I agree, and I've been wanting to read this book. I'll watch for your review.

Mmm, olives, one of my favourite condiments! This sounds like magical realism and a great story about a family. Have I guessed right? Intriguing!