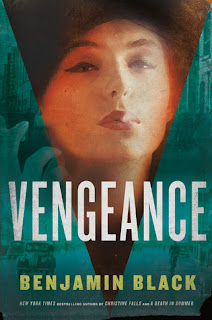 Your father died of a gunshot wound," Hackett said. "It seems he fired the shot himself."
Jonas pulled a dismissive face. "I don't believe it," he said. (ch. 3)

About the book: A bizarre suicide leads to a scandal and then still more blood, as crime novelist Benjamin Black reveals a world where money and sex trump everything. The mysterious death of a successful Irish businessman engages the attention of Detective Inspector Hackett, who calls upon the services of his sometime partner Quirke, consultant pathologist at the Hospital of the Holy Family.

To listen to an audio clip of the Audiobook Vengeance, click HERE.

This one sounds really good! Thanks for sharing. Here's MY TUESDAY MEMES POST

This does sound really good, and like something that would keep my blood pumping! Great post today!

Really does sound interesting. Thanks for sharing. Here's my Teaser

My tuesday teaser is from Firefly Beach by Meira Pentermann

Sounds like a great plot. Thanks for posting a synopsis along with your teaser.
My teaser is from Hot Issues, Cool Choices.

What? Money and sex trump everything? In today's world? ;)

Excellent teaser, Harvee! I hope you enjoy the book.

Bellezza: I have to confess that ever since I became a reader of Nancy Drew in grammar school I have become an avid reader of good mysteries, and this is one of them!

I love mysteries (and thrillers), too. Here's a confession: I've never read a Nancy Drew book! Do you think I should hand in my teaching certificate? :)

Bellezza: It's never too late. I suggest you start with the original and first Nancy Drews.

I enjoyed the first two Benjamin Black mysteries, but never considered listening. Will look forward to your review.

Benjamin Black is an author I've been wanting to try to ages. I've loved his books written as John Banville, but am interested to see how his writing changes for mysteries. I really should read him before he writes too many more!

Hmmmm...not usually my genre but I am curious as to how he was really killed!