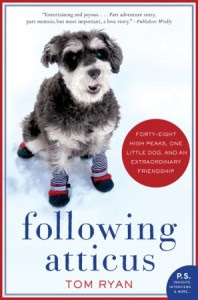 
I was once asked if Atticus was the perfect dog. "He's perfect for me," I said. (from the Acknowledgements).

About: A little dog named Atticus M. Finch helps Tom Ryan on an extended journey of self discovery and healing by accompanying him on long and isolated nature treks up and down the mountains of New Hampshire.

Comments: The writing is excellent and pulls the reader into the heart of the writer and into the center of his journeys with Atticus, who often leads the way on the treks. In the middle of the book, I thought that Tom and Atticus would stop climbing, retire, and take it easy, having already climbed so many 4,000-foot mountains in all kinds of weather. But they continued on, during one winter making the rounds of mountains twice and raising money for an animal medical center. I read on and realized that Atticus pined for the mountains as much as Tom did and that their outings are a big part of what keeps them both contented.

Recommendations: This book is a good one for all dog lovers and trekkers. Those who normally avoid dog books because they fear an unhappy ending when the dog dies need have no fear. Atticus and Tom are both still active and mountain trekking. 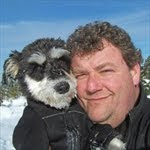 The author: In 2007 former newspaper publisher and editor Tom Ryan moved to New Hampshire with miniature schnauzer Atticus M. Finch. Tom and Atticus have climbed more than 450 four-thousand-foot peaks over the last five years. After raising thousands of dollars for Angell Animal Medical Center in Jamaica Plain, Massachusetts, the pair was inducted into the Massachusetts Society for Prevention of Cruelty to Animals Hall of Fame. Tom currently writes The Adventures of Tom & Atticus column in the Northcountry News and Mountainside Guide, and the blog The Adventures of Tom & Atticus. Tom and Atticus live in the White Mountains of New Hampshire.

For more reviews of Following Atticus, see the Book Tour Schedule.
Thanks to TLC Book Tours and the publisher for a review copy of this book.
at August 19, 2012