Book Review/Tour: Things Your Dog Doesn't Want You to Know by Hy Conrad and Jeff Johnson 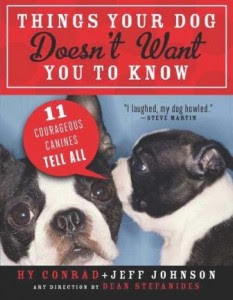 There are 115 humorous essays by dogs who reveal their feelings and thoughts and tell on their owners, many of whom don't really understand or know what their dogs really think about them.

The essays are all told in the first person by the dogs in question and readers will nod their heads in sympathy and understanding, or shake their heads with humor and surprise.

Such are the two page essays that reveal each dog's personality, likes and dislikes, and gripes. They also try to explain their behavior, such as why they eat grass, wag their tails, why one ate the sofa, etc. There is a picture to go with each dog's essay, so we can see what the dog speaker/thinker looks like.

Here are some excerpts from the essays:

1. Bandana the Border Collie wants to tell his owners: "I Raised Your Kids." "For a few years, I was as smart as those two, maybe smarter. It took me a lot less time to get house-broken. Also walking. In fact, I'm the one who taught them. They didn't take their first stumbling steps running to you. No. They were running from me."

2. Tinkerbell the Chihuaha wants her owner to know she is a dog, not a person: " The first time you said it, I thought it was a joke. "Tink doesn't know she's a dog. She thinks she's people." Margo, sweetie, that's just wrong.... For a while I went along. I wore the costumes; I shook hands; I joined your Facebook page: I drank melon swizzles and sang karaoke."

3. Alexrod the Yellow Lab doesn't understand his human's behavior: "Why is it okay for you to pee in the house? Also, why is it okay for me to pee against a tree but not for your brother when he drinks too much beer?"

You get the idea - the life of dogs with their humans, from the dogs' point of view. A clever and humorous book for those who own pets and even for those who don't but who want to understand why so many people adore pets, especially dogs. 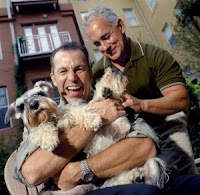 For more reviews, visit the tour schedule.
About the authors:


HY CONRAD was one of the original writers for the series, Monk, working on the show for all eight seasons, the final two as Co-Executive Producer.  His latest TV work was as writer and Consulting Producer for White Collar.
Hy is also the author of short stories and books of short whodunits, which have been sold in fourteen languages.  Hy’s first mystery novel series, Abel Adventures, will debut in 2012 with Rally ‘Round the Corpse.  He lives in Key West and Vermont with his partner and two miniature schnauzers. (www.hyconrad.com)
JEFF JOHNSON spent most of his working life in advertising agencies, currently as General Manager of Cramer-Krasselt in New York City.  He is the author of The Hourglass Solution:  A Boomer’s Guide to the Rest of Your Life and co-authors a national online advice column called Short Answers.  Jeff lives in Vermont and Key West and is on the Board of Directors of the Waterfront Playhouse and the Florida Keys SPCA.

For the book's website, visit www.thingsyourdog.com
Thanks to TLC Book Tours and the authors for a review copy of the book.
at October 18, 2012

This book sounds so funny! My sister the dog lover may be getting this as a gift. :)

Oh, what fun! My dog-crazy daughter would love this... and I think I'd enjoy reading it, too.

I'm a huge animal lover so this book sounds great to me!

I love this book, and want to read it at some point. I wonder what my dogs would say to me, if they could.They would probably praise my husband for being such a great hunter, as he is always carrying in food from the grocery store! Awesome job on this review today!

This book sounds like fabulous fun--and I love the cover! Thanks for a terrific review, Harvee.

Glad you enjoyed it, I liked this one too. Tinkerbell the Chihuaha was too cute as were all the rest of the pups and their 'thoughts' on life.

The excerpts cracked me up. I must read it!

We are definitely dog people in our house so I'm sure my whole family would enjoy this one!