Guest Post: Lucinda Riley, author of The Girl on the Cliff 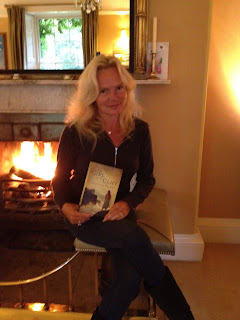 Title: The Girl on the Cliff by Lucinda Riley
To be released October 30 by Atria Books
Genre: Irish fiction


The Girl on the Cliff – The Inspiration by Lucinda Riley

It’s always a location, or a house and the atmosphere surrounding it, that inspires inside me those first seeds which eventually germinate into a book. This was very much the case with ‘The Girl on the Cliff’.

I was born and lived in Ireland on the West Cork coast and I loved its wildness and isolation. ‘Extreme’ locations are always exciting to me because they are dramatic and of course, romantic. The thought of a vulnerable child, barefoot and alone during the Atlantic storms that used to break with such fury when I lived there with my own small children, gave me the character of ‘Aurora’, the narrator of the book. I wanted to make her ‘other-wordly’ and ephemeral, almost part of the intense, dramatic scenery which surrounded her when she was born.

I will confess that Aurora is the first character I’ve ever written who is basically ‘me’. I poured my soul into her – something I’ve never done before in one of my books. All my beliefs, hopes and fears; a lot of my life - I’m an ex-ballerina who got so sick I was bedridden and had to ‘use my mind, not my body, to express myself’ – is in there . Yes, like her, I’ve seen ghosts and angels and believe in the ‘afterlife’. I’ve suffered terrible loss , as most of us have at some point in our lives, but still believe, as Aurora says, that ‘love and faith and goodness and hope’ will win the day. And that human nature, for the most part, is intrinsically ‘good’. Otherwise, we wouldn’t still be here on the planet – we’d all have murdered each other thousands of years ago! This book is so personal, it’s painful. Basically, if readers reject Aurora, they are rejecting me!

Some readers may find Aurora’s spiritualism and endless positivity in the face of adversity irritating. But, the US dollar bill itself has ‘In God We Trust’ written on it … yet, to my knowledge, no-one has ever managed to take a photograph or interview him! As Aurora says, ‘just remember, there’s no proof either way. So I choose to believe. It’s much the best option.’ I’m not into any particular organised religion, by the way, I just believe in a power higher than us humans, and am humble enough to realise there is so much we can never understand. Who/what energy created the Big Bang in the first place …? No-one knows. So, it’s pretty obvious this book is not for ‘cynics’ who don’t believe in a ‘higher level’, or that the world is fundamentally a bad place. Redemption and some level of forgiveness is always a possibility, if not an actuality in some cases. And that is the rock-bed from which all my stories and characters come. And besides Aurora, there is a huge, intricate family story, spanning over 100 years. There are characters, good and bad, that pepper the plot.

Also, in ‘The Girl on the Cliff’, I’ve explored the fact that, as one grows older, the seesaw of pain and joy of the human condition become more stark. During the writing of the novel, I became fascinated by ‘the fairytale’, which all modern romantic novels are a derivative of. In particular, the ‘happy ending’, which every fairytale contains and is in fact, an integral part of their beauty. Yet, what happens after the ‘Happy Ever After’? And how to write an ending, given the depth of the characters involved in ‘The Girl on the Cliff’, in which the conclusion is both satisfying and moving?

In conclusion, ‘The Girl on the Cliff’ has all the ingredients of ‘The Orchid House’: the ‘big story’, a dual narrative and locations which fire my imagination, yet I hope I have added a new dimension, a depth and realism in the storyline which isn’t trite or contrived. In this book, more than any other story I’ve written, the characters demanded to be heard and I gave them their voice. 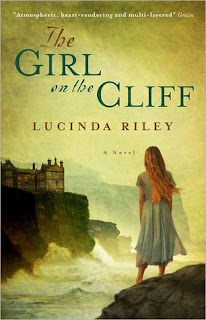 The Girl on the Cliff book description: From New York, Grania Ryan returns to her family home on the rugged, wind-swept coast of Ireland. Here, on the cliff edge in the middle of a storm, she meets a young girl, Aurora Lisle, who will profoundly change her life.

Despite warnings Grania receives to be wary of the Lisle family, Aurora and Grania forge a close friendship. Through old family letters dating from 1914, Grania learns their families’ histories are entwined. The horrors of World War I, the fate of a beautiful foundling child, and the irresistible lure of the ballet leave its imprint on each new generation. Ultimately, it will be Aurora who may be able to unlock the chains of the past.

Lucinda Riley is the bestselling author of The Orchid House. Born in Ireland, she lives in the English countryside and in France with her family.
at October 11, 2012

Email ThisBlogThis!Share to TwitterShare to FacebookShare to Pinterest
Labels: fiction, guest post, Irish fiction., The Girl on the Cliff

What a great post! I just read this book recently and I loved it, it is so great to get further insight into the book from the author.

great post! I have Girl on the Cliff on my shelf - my Mom read and loved it!

I love how she is so open about the main character of the book being a mirror of herself, and I can certainly understand why she would be so much more sensitive about this book than others. I loved this guest post, and would love to read the book sometime. I find that a lot of my beliefs are the same as the author's. Nice job today, ladies!

I also enjoyed this guest post, and the book sounds wonderful as well.

I loved this book, but I never realized that Aurora was 'really' Lucinda. I can see how her heart went into creating the characters, though. Great interview post!

What a timely post as a copy of this one arrived today on my doorsteps!!

This looks so good! What a lovely cover!

‘The Girl on the Cliff’ just arrived in the mail this week and I cannot wait to read it, it sounds so good.
Thanks for this post! Perfect timing to read a bit about the author and her writing inspirations.