Book Review: The Round House by Louise Erdrich 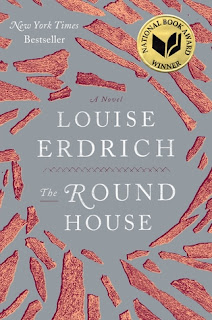 Title: The Round House by Louise Erdrich
Published October 2, 2012; Harper Collins
Winner of the National Book Award for Fiction


Joe, he said carefully. I should have told you I am proud of you. I am proud of how you love your mother. Proud of how you figured this out. But you do understand that if something should happen to you, Joe, that your mother and I would...we couldn't bear it. You give us life... (ch. 5, from an advance reader's edition. The final copy may differ)

I saw this as part coming of age story, part mystery, part political novel - a novel set in 1988 on a Native American reservation in North Dakota that addresses the "tangle of laws that hinder prosecution of rape cases on many reservations." Problems are still being straightened out even after the Tribal Law and Order Act was signed in 2010 by presidential act to help remedy the situation.

Thirteen-year-old Joe, son of a reservation judge, decides to take matters into his own hands when the man who seriously attacked and brutalized his mother is let go, not prosecuted since it could not be proven exactly where the attack took place - on reservation land, state land, or fee land (land belonging to a tribe outside of the reservation).

The story involves the histories of several persons living on and off the reservation. These histories converge and create a situation that resulted in the attack on Joe's mother, who worked on the reservation and had access to a file crucial to the story.

The Round House won the National Book Award for Fiction for 2012, a well deserved recognition.

Louise Erdrich is the author of thirteen novels, plus volumes of poetry, short stories, children’s books, and a memoir of early motherhood. Award winners, Love Medicine, The Last Report on the Miracles at Little No Horse, and The Plague of Doves are among them.

Erdrich, a Native American member of the Ojibwe and Chippewa nation is described as one of the most significant Native writers of the second wave of the "Native American Renaissance." She lives in Minnesota and is the owner of Birchbark Books, an independent bookstore.

For more reviews, visit the tour schedule. Thanks to TLC Book Tours and the author/publisher for a review ARC of the novel.

This book is on my list! Thanks for sharing the lovely teaser...and here's MY TUESDAY MEMES POST

I've been seeing a LOT of praise for this book, but until now, had no idea what it was about. Judging from the summary and your teaser it definitely sounds like a book I'd enjoy!

This definitely belongs on my wish list. Thanks for the review!

I read Shadow Tag, and it also had Native American references in it. I actually think that all her books do, but it was so sad and bleak, and while I do want to read this one, I am needing something more upbeat for the holidays. It's going on the wish list for sure, but maybe for the summer. Nice teaser today!

Glad you all liked the teaser!
Z: This may not so bleak, I don't think, as the one you read, as it's part mystery and the ending wraps things up very well.

I would keep reading. I've got this on my TBR list.

The Native American tales that influence the present in the book sound fascinating! (I looked at that moon chart you linked to and look forward to the Full Cold Moon this month.)

wow, this sounds very good and unlike anything I've read. I may have to check this one out.

I know the feeling. Great teaser. Please check out my teaser.

Great teaser! Sounds like a terrific book as well. Thanks for the introduction.

I really liked this one a lot; in fact I've enjoyed everything I have read by this author. Nice review.

So glad you shared this book! I've read books by Erdrich and intend to add this one to my TBR list. Thanks for the reminder of an author whom I enjoy!

Sounds like an intense story - looking forward to reading it.

Thanks for the interesting review. I've been thinking about reading this book. Would you consider it as having a "social justice" (or injustice) theme? I can't decide from the description.

Rachel: there is social injustice re the laws that make prosecution difficult for the tribes. There is a sort of social justice in the manner of mystery novels. The novel is complex and can't be put into clear cut categories.

I haven't read many books with Native American protagonists and I'm certainly not familiar with many of the traditional stories - sounds like this book would be an eye-opener for me!

This book sounds interesting and I haven't read anything like this before. Adding this to my TBR.

I'm really excited to read this one. I'm in this year's TLC tour, FINALLY!!