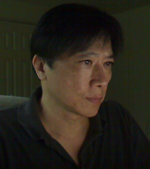 Welcome to Khanh Ha, author of the historical novel Flesh (Black Heron Press, 2012) set in early 20th century Vietnam. He gives us the background and inspiration for his book and the family history that impels this story.  He also discusses his upcoming and second novel.
Flesh

The Ideas and Inspiration Behind It

by Khanh Ha
Flesh, is set in Tonkin (now northern Vietnam) at the turn of the 20th century. It tells the story of a sixteen-year-old boy who witnesses the execution, by beheading of his father, a notorious bandit and sets out to recover his father’s head, and then finds the man who betrayed his father to the authorities.

A coming-of-age story of brutal self-awakening and also a tender love story, takes the reader into places, both dark and wonderful, in the human condition where allies are not always your friends, true love hurts, and your worst enemy can bring you the most solace. As its author, I was asked what inspired me to write about this specific subject.

There was an image formed in my mind after I read a book called War and Peace in Hanoi and Tonkin, which was written by a French military doctor. In one chapter he depicted an execution by capital punishment. The scene took place on a wasteland outside Hanoi. This bandit was beheaded for his crime while the onlookers, some being his relatives with children, watched in muted fascination and horror. While reading it, I imagined a boy—his son—was witnessing the decapitation of his father by the hand of the executioner. I pictured him and his mother as they collected the body without the head which the government would display at the entrance of the village his father had looted. I thought what if the boy later set out to steal the head so he could give his father an honorable burial. What if he got his hand on the executioner’s sabre and used it to kill the man who betrayed his father for a large bounty. However, it really started with a story within my family.  My mom told me that my grandfather was one of the last mandarins of the Hue Court, circa 1930.
At that time the Vietnamese communists were coming into power. They condemned any person a traitor, who worked either for the French or the Hue Court. So my grandpa was a traitor in their eye. One day news came to him that a communist gathering was to be held in one of the remote villages from Hue. He set out to that village with some of his bodyguards to punish the communists. Unfortunately, news leaked out about his trip. He was ambushed on the road—his bodyguards were killed—and he was beheaded. The communists threw his body into a river.

My grandma hired a witch doctor to look for his headless body. Eventually the witch doctor found it. They were able to identify his body based on the ivory name tablet in his tunic. My grandma hired someone to make a fake head out of a coconut shell wrapped in gilded paper and buried my grandpa on the Ngu Binh Mountain. The beheading of grandpa surfaced again while I was reading the decapitation scene in War and Peace in Hanoi and Tonkin.

I spend much, much time in researching before I write. I’m a perfectionist and the harshest critic of myself. I have to know everything about what I’m going to write—well, sort of—before I ever pen the first word. Indeed much research was done before I felt dead sure about writing it.

More than once I was asked if I’m currently busy with a work-in-progress.

Yes, I’m about done with my next novel. But I rarely talk about what I’m working on. It may sound like a hard-line stance. But well, I can give you a harmless description. When I was still a struggling young writer, I came across a very old Vietnamese magazine article written about a centenarian eunuch of the Imperial Court of Hue. He was already dead the year the story was published, circa 1966. Two years before I was born. A sketchy story whose facts were gleaned from the eunuch’s adopted daughter, that ended with a small halftone photograph of her portrait. I put the article away. But I couldn’t put the story away, even months after. It dawned on me then that it wasn’t the story.

It was the face in the photograph. I traveled to Hue, Vietnam in the summer of 1991. I was 23. I went with her image in the photograph and when I finally met her, the eunuch’s daughter, that image hadn’t changed. She was someone like a forbidden love to a young man half her age. The first time she gave me a glimpse of her past from her spotted memory, it was in a sugarcane field where two decades earlier, her lover—a young American—had died in her arms.

Thanks to the author for this very interesting post. For reviews of his book, visit Virtual Author Book Tours.

About the book:
The title refers to temptation-the temptation of the flesh. But it refers equally to the obligations of kinship, the connections between us and those to whom we are related, even if we would choose not to be.

Khanh Ha was born in Hue, the former capital of Vietnam. During his teen years, he began writing short stories, which won him several awards in the Vietnamese adolescent magazines. He graduated from Ohio University with a bachelor’s degree in Journalism. FLESH (Black Heron Press, June 2012) is his first novel (literary fiction).

Visit the author at: http://www.authorkhanhha.com

Thanks to Teddy Rose at Virtual Author Book Tours for this guest post by the author.

Wow, Flesh sounds like an intense read. How fascinating that actual events from the authors past inspired it.
Very interesting post!

Thanks again for taking part in the tour and hosting Khanh!

Sounds like a very interesting book. I think that too few people know much about the history of Vietnam pre World War II.