Book Review: The Prisoner of Heaven by Carlos Ruis Zafon 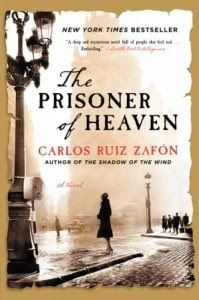 It helps to know a little about the volatile political situation in Spain in the 1930s and 40s in order to really understand The Prisoner of Heaven, as well as the two previous books in the series, The Shadow of the Wind and The Angel's Game. The novel to me is almost an allegory of what the country Spain went through during its brutal Civil War from 1936-1939 and the subsequent years under the Franco military dictatorship. It seems the life of the character Fermin Romero de Torres during those early years mirrors what much of the country suffered.

The book begins in a relatively peaceful and prosperous time in 1957 and flashes back for at least half of the book to 1939 and 1940 when Fermin was jailed under horrifying conditions in a castle prison in Barcelona, because of his political activities. In prison, he promises the Prisoner of Heaven, David Martin, incarcerated only for his literary talents, to watch over Isabel Sempere, her husband, and their son Daniel, a family who owns a bookstore in the city.

The inmate called the Prisoner of Heaven, David, was in jail because of prison governor Mauricio Valls, who had David jailed for purely self-interested reasons. Fermin is declared dead after trying to escape from the prison with David's help, but brought back to life, as it were, to reappear in the 1950s as a worker in the bookstore run by Sempere and his son Daniel, now a grown man.

When he discovers secrets about his mother Isabel, Daniel starts on a mission of revenge for the past, a mission that leads him to hunt for Mauricio Valls, and this quest I think will continue into the next book in the series.

I read The Shadow of the Wind but missed The Angel's Game, both books of high literary value that are referred to in The Prisoner of Heaven.  These books in the Cemetery of Forgotten Books cycle don't have to be read in sequence, but first, bone up just a bit on the Spanish Civil War in order to get a background of the excellent novel you are about to read.

Carlos Ruiz Zafón, author of bestselling novels, The Shadow of the Wind and The Angel’s Game, is one of the world’s most read writers. His work has been translated into more than fifty languages, garnering numerous international prizes. He divides his time between Barcelona and Los Angeles.
Find out more about Zafón at his website, connect with him on Facebook, and follow him on Twitter.
- March 19, 2013