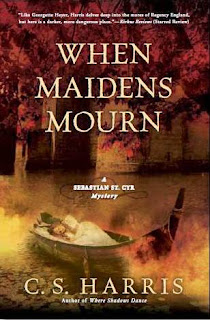 Looking up, he said, " Do you know where Miss Tennyson planned to take her young cousins yesterday?"
The nursemaid shook her had. "No. She told them it was a surprise."
"Could she perhaps have intended to show them the excavations at Camlet Moat?" (ch. 9)

About the book: Regency England, August 1812. When Gabrielle Tennyson is murdered, aristocratic investigator Sebastian St. Cyr and his new reluctant bride, the fiercely independent Hero Jarvis, find themselves involved in an intrigue concerning the myth of King Arthur, Camelot, and a future poet laureate...

Comments: A young woman is found stabbed and left in a boat at Camlet Moat outside of London. She was known for her ongoing research on a site some claimed as the original Camelot, and investigator Sebastian St. Cyr thinks her death may be connected to her work. The two young cousins who were with her that day are missing.

Recommendations: This is the first of the eight Sebastian St. Cyr mysteries that I've read. It's the seventh in a series. What ties the books together is the ongoing life of St. Cyr - his distant father, questions relating to his parentage, his love affair with an actress, and his marriage to Hero, the daughter of a prominent and influential member of government. Hero and St. Cyr work together on this mystery as the dead woman Gabrielle was a close friend of Hero's.

Excellent read. I am eager to read the next in the series, which is already out - What Darkness Brings.

This one does sound like its got a lot going for it, and I am glad that it delighted and surprised you. It speaks well of the book that you are so excited to read the second in the series. Excellent job recapping and providing your thoughts on this one. I might have to see if I can find it!

This does sound terrific, Harvee! Very nice, concise review. You are reading so much more than me these days!

Based upon your description the characters sound well drawn out and interesting especially Hero.