"On the evening of November 5, my mother, Kathy, John, and I made our way to Southampton, where we boarded the SS America and crossed the Channel to France, where we spent the night. The next morning, after breakfast, we resumed our journey westward, chasing the sun. Greeted by the Statue of Liberty, we arrived in New York harbor shortly after 10 a.m.; it was, fittingly enough, Armistice Day. Shortly before Christmas, my father joined us, crossing the Atlantic on the Queen Mary." (p. 408)

My comments: Madeleine Albright was a child when the events she describes took place. She includes her memories of her years as the daughter of a Czech diplomat, who eventually sought asylum in the U.S., arriving here in 1948. Much of the book is heavily researched history of Czechoslovakia during WWII, a book she started after finding her mother's essay and her father's papers and unpublished novel about Czechoslovakia.  She also researched to know more about Czechoslovakia, after discovering her family's Jewish roots. I hope to also read someday Albright's memoir as the adult stateswoman, Madame Secretary.

Publisher's description: "Before Madeleine Albright turned twelve, her life was shaken by the Nazi invasion of her native Prague, the Battle of Britain, the near-total destruction of European Jewry, the Allied victory in World War II, the rise of communism, and the onset of the Cold War. Drawing on her memory, her parents’ written reflections, interviews with contemporaries, and newly available documents, Albright recounts a tale that is by turns harrowing and inspiring.

In Prague Winter, Albright reflects on her discovery of her family’s Jewish heritage many decades after the war, on her Czech homeland’s tangled history, and on the stark moral choices faced by her parents and their generation. At once a deeply personal memoir and an incisive work of history, Prague Winter serves as a guide to the future through the lessons of the past—as seen through the eyes of one of the international community’s most respected and fascinating figures." 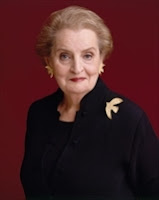 See other reviews at TLC Book Tours, which provided a review copy of the book.

Madeleine Albright served as America’s sixty-fourth secretary of state from 1997 to 2001. Her distinguished career also includes positions on Capitol Hill, on the National Security Council, and as U.S. ambassador to the United Nations. She is a resident of Washington, D.C., and Virginia.
- March 13, 2013