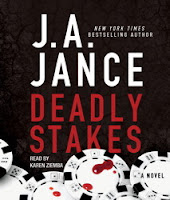 "That's the problem," Detective Cutter said. "We don't know who the victim is. No identification was found on the body, and so far, no one matching the victim's description has been reported missing anywhere in the Phoenix metropolitan area. We initially thought that finding the owner of the phone would lead us to the victim."

"But I'm not dead," Lynn objected.

Title: Deadly Stakes: A Novel by J.A. Jance
Published February 5, 2013; Touchstone
Description: Ali Reynolds finds herself working against the police to clear two innocent names…with deadly stakes. Police academy-trained former reporter Ali Reynolds investigates the murder of a gold-digging divorcee on behalf of a woman accused of the crime. Lynn Martinson is dating the dead woman’s ex-husband, and she and her boyfriend Chip Ralston have been charged.
at March 22, 2013

This sounds really good! I love mystery books and police proceedurals. I'm ashamed to admit that I haven't read a J.A. Jance book yet but I've heard great things about them.

Whoa, sounds like something really wicked is about to happen!

Sounds good, I love this type of book!

Fab 56! It sounds like a great mystery in the pages.

This does sound intense.

That is an awesome snippet! I'm adding Jance to my wishlist :)

This passage was neat. It actually could work as quote on the back of a book.