Teaser Tuesdays is hosted by MizB; choose sentences from your current read and identify author and title for readers. 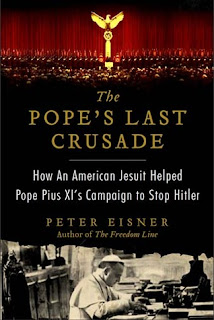 "We will issue an encyclical on these matters, one which you must prepare," Pius told LaFarge.


LaFarge was to write an encyclical that would use the same reasoning he employed when discussing racism in the United States. He needed to convey that Hitler's increasing assault on the Jews was based on a myth." (ch. 4)

Publisher's description:
"In 1938, Pope Pius XI was the world's most prominent critic of Hitler and his rhetoric of ethnic "purity/" To make his voice heard, Pius called upon relatively unknown American Jesuit whose writing about racism in America had caught the Popes attention. Pius enlisted John LaFarge to write a papal encyclical - the Vatican's strongest decree - publicly condemning Hitler, Mussolini, and their murderous Nazi campaign against the Jews."

Goodreads description: "Drawing on untapped resources, exclusive interviews, and new archival research, The Pope’s Last Crusade by Peter Eisner is a thrilling narrative that sheds new light on Pope Pius XI’s valiant effort to condemn Nazism and the policies of the Third Reich—a crusade that might have changed the course of World War II.

A shocking tale of intrigue and suspense, illustrated with sixteen pages of archival photos, The Pope’s Last Crusade: How an American Jesuit Helped Pope Pius XI's Campaign to Stop Hitler illuminates this religious leader’s daring yet little-known campaign, a spiritual and political battle that would be derailed by Pius XI's death just a few months later. Eisner offers a new interpretation of this historic event and the powerful figures at its center in an essential work that provides thoughtful insight and raises controversial questions impacting our own time."

Oh, this does sound rather interesting, and like a little known piece of history that I had no idea about! I need to see if I can find this one because the subject matter sounds fascinating. Great review today!

This sounds like an intense and interesting read. I'll have to take a closer look.

Very interesting period and subject indeed! Though I am interested in the period I know almost nothing of this story. I may give this one a read!

Sounds interesting. I don't read much nonfiction though. Please come see my teasers for House Rules by Chloe Neill and Strands of Bronze and Gold by Jane Nickerson. Happy reading!

Too bad the thesis behind this books is false. When the future pope was the Vaticans poltitical represenative in Germany in the 1930's he promoted a Condcordant with the Nazi which protected the Catholic church and allowed the demise of Catholic center left party and the last chance for democracy..... I'd recommend reading the play "The Deputy".

Sounds interesting, even though I don't read much nonfiction. I hope you enjoy the book! Here's my TT post!

Trutbirder: I think the play, The Deputy, refers to Pius XII, but this book is about his predecessor, Pius XI.

This does sound fascinating, happy reading.

Eisner is more interested in selecting facts that fit the story he wants to tell than telling a story based on the facts. There are some very basic errors that any student (or scholar) of the era would catch. He spends more time on conspiracy theories about an alleged assassination of Pius XI than actually reading the unpublished "Lost Encyclical"-- which had he done so, he would have realized that even as it rejected Nazi-racism, it contained harsh attacks on the Jewish religion-- which if published, would likely be seen as Papal approval for anti-Semitic attacks.

Troutbirder: you are correct that the thesis of the book is false; but Hochhuth's "The Deputy" has its own set of historical inaccuracies. Also, the Catholic Centre party, wasn't really "left" in any sense we would recognize today: it was deeply a anti-Semitic, German-Catholic-nationalist party.