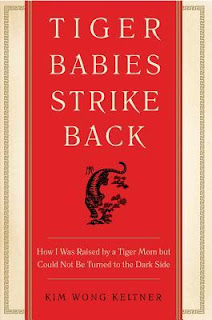 Kim Wong Keltner's memoir describes her life growing up under the thumb of a demanding and stoic Chinese mother. Kim says she suffered from lack of affectionate hugs, outward shows of love, words of praise from her mother, and eventually moved away from their home in San Francisco after her marriage to native Californian, Rolf Keltner, to gain independence and a better perspective. But she says this about her mother:


The Reamer (Irene, her mother) didn't coddle me. But it wasn't for lack of love. She did not coddle me because she loved me. She wanted me to be strong so I could live without her." (ch. 38)

Kim gives this message to Tiger Parents, those parents who push their children to extremes toward success.


Tiger Parents,you may be asking yourselves, "What is the point of this book?"
Love your babies, and show your babies that you love them. Withholding acceptance and praise while pushing your children into achievement might yield certain results, but that kind of pressure stifles other aspects of growing up." (epilogue)

And there are messages for the children of Tiger parents,  for whom she wrote this book:


"Have an emotional life. Please yourself. Second best ain't worth killing yourself over...."

The author cites Amy Chua's Battle Hymn of the Tiger Mother as an impetus for her book and as a response to Chua's Tiger Mother perspective.

To those who were not born with Tiger Parents, this sort of advice may seem unwarranted, but the author clearly feels everything she puts into the book. And there is a lot of emotion here. The memoir seems to rant at the beginning and even to generalize about who Tiger Mothers are and how they came to be. However, the author soon gets into specifics with examples from her family, acquaintances, and from her own life.

Not all Tiger Children escape unscathed from their parents' upbringing as Kim did. Some are forever stifled, she shows. These Tiger Children include those who never leave home and are brought up with the sole idea of being their parents' caretakers, or the child whose romantic and personal life is squelched by overwhelming family /parental disapproval.

One of the early drawbacks: living in a "Tiger box" made it hard for Kim to develop female friendships while growing up. Other Chinese girls in their own Tiger boxes wanted to show independence or exhibited one-upmanship, which prevented close alliances.

One exception to the Tiger parent rule was Kim's kinder grandmother Lucy, whom she remembers with fondness and brings into mind the difference between the generations in bonding with children.

I understood and felt everything that the author was trying to say, even though my parents are a generation removed from the "old country." A strict culture filters down inexorably though it may dissipate somewhat on the way down. I am anxious to see what others think about Kim's memoir, those who weren't raised within such strict confines. There is a lot in the book for general readers, to understand the interior of a traditional (though what might seem a somewhat stereotypical) Chinese family.

Title: Tiger Babies Strike Back: How I Was Raised By a Tiger Mom But Could Not Be Turned to the Dark Side by Kim Wong Keltner
Published April 30, 2013; William Morrow paperback
Genre: memoir
Objective rating: 4.5/5

For other reviews of the book, visit the TLC Book Tour schedule.

About the author:
The only thing that keeps Kim Wong Keltner from writing is when she’s trapped under an avalanche of her daughter’s stuffed animals. Kim is the author of The Dim Sum of All Things, Buddha Baby, and I Want Candy. Tiger Babies Strike Back is her first work of non-fiction. You can reach her at kimwongkeltner.com


Thanks to TLC Book Tours and the publisher for an ARC review copy of the book.

Also submitted to Teaser Tuesday, hosted by MizB of Should Be Reading, and to Cym Lowell's Book Review Link-Up Party.
- April 30, 2013