Oscar Wilde and the Murders at Reading Gaol by Gyles Brandreth 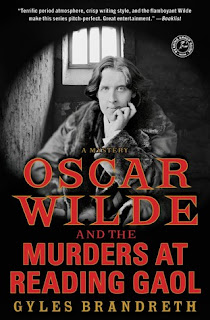 In this next excerpt, an imprisoned Oscar talks with the prison surgeon, Dr. Maurice, and we learn a little about Oscar Wilde's friendship with Arthur Conan Doyle, the writer.


"... And you, I've been led to believe, are Conan Doyle's model for Holmes's older brother - the brilliant but indolent Mycroft Holmes." (ch. 6)

Book description:  In this new installment in the engaging mystery series—currently in development as a BBC television series—the incomparable playwright, novelist, raconteur, and now ex-convict Oscar Wilde faces his most fiendishly puzzling case yet.

It is 1897, France. Oscar Wilde has fled the country after his release from Reading Gaol. Tonight he is sharing a drink and the story of his cruel imprisonment with a mysterious stranger. Oscar has endured a harsh regime: the treadmill, solitary confinement, censored letters, no writing materials. Yet even in the midst of such deprivation, his astonishing detective powers remain undiminished—and when first a brutal warder and then the prison chaplain are found murdered, who else should the Governor turn to for help other than Reading Gaol’s most celebrated inmate? (goodreads)

This is the fifth in the Oscar Wilde mysteries.
Thanks to Touchstone for a review copy of this book.
- May 09, 2013