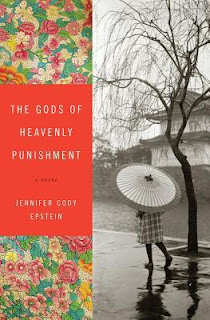 My summary: This is a novel about the war between the Japanese and the Americans in WWII, the atrocities of war on both sides, and the innocent families and people affected both in the U.S. and in Japan. The fire bombing of the city of Tokyo in 1945 when innocent civilians were killed or maimed is the reason for the title, The Gods of Heavenly Punishment.

My comments: I was confused while reading the book. I didn't know whether I should hate the Japanese for their war atrocities and killing downed American pilots during the war or hate the Americans for killing and maiming 100,000 innocent civilians in the later firebombing of Tokyo.

The book presents multiple points of view. We grow to detest a Japanese war criminal at the same time as we like his young daughter Yoshi and feel sorrow for his wife. We are dismayed at the execution of a young American pilot by Japanese troops in Manchuria and we feel pity for his wife. We are also appalled at the suffering and the death of civilians during the firebombing of Tokyo by American planes. At the end of the book, however, the various threads of the story are woven together and Yoshi makes a gesture of contrition to the wife of the American pilot killed during the war.

It is not an easy book to read. It is depressing in parts because the circumstances of war and the horrific effects on the people involved. Kudos to Jennifer Cody Epstein for tackling this subject and bringing all the elements together in a question of whether war justifies all actions. The book makes us think about the justification for killing innocents during war with its quote from one of the characters: "It's not murder! It's war."

Publisher's description: A lush, exquisitely-rendered meditation on war, The God of Heavenly Punishment tells the story of several families, American and Japanese, their loves and infidelities, their dreams and losses, and how they are all connected by one of the most devastating acts of war in human history.

Jennifer Cody Epstein is also author of the international bestseller The Painter from Shanghai. She has written for The Wall Street Journal, The Asian Wall Street Journal, Self, Mademoiselle and NBC, and has worked in Hong Kong, Japan and Bangkok, Thailand. Jennifer lives in Brooklyn, NY with her husband, two daughters and especially needy Springer Spaniel. To connect with Jennifer, “like” her on Facebook.

Thanks to TLC Book Tours and the publisher for a review copy of this book.
Submitted to the 2013 Historical Fiction Reading Challenge and Cym Lowell's Book Review Link-Up Party and Saturday Review of Books hosted by Semicolon.
- May 20, 2013