Book Review: Running With the Enemy by Lloyd Lofthouse 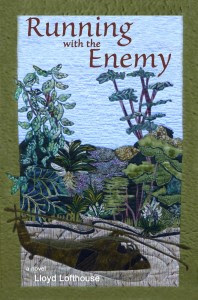 "Then Wat Po, the Temple of the Reclining Buddha came into sight, and she saw Wat Arun, Temple of the Dawn, on the other side of the river. Even after the year in France and Vietnam, Tuyen still recognized the beauty of The City of Angels (Bangkok). (ch. 17)

Lloyd Lofthouse describes his book Running with the Enemy as a memoir that evolved into fiction. As a Vietnam veteran who had seen and experienced enough to leave him with post traumatic stress disorder, he wrote this book it seems to come to terms with all he experienced in Vietnam. The book became fiction, an action novel with a strong romance component.

Overall it rings true of war and what it was like to serve in Vietnam. Much of the book details the fighting, the casualties and the heartbreak and the trauma experienced by the soldiers. The book also takes you on a dizzying journey when the lovers Tuyen and Ethan flee to other countries in Southeast Asia - Laos, Cambodia, Bangkok, Thailand ,and Burma (Myanmar).

For those who would like to get a sense of what combat was really like, this is an excellent book, which began as a memoir of Vietnam.

Publisher's description:
In this suspense thriller set during the Vietnam War, Victor Ortega is a rogue CIA agent, and he needs someone to blame for his crimes. Recon Marine Ethan Card is the perfect patsy.

When Ethan discovers he is going to be court marshaled for weapons he did not sell to the Viet Cong and his secret lover, a beautiful half-Vietnamese and half-French woman, Tuyen, will be arrested, he hijacks a U.S. Army helicopter and flees with Tuyen across Southeast Asia while struggling to prove his innocence. Victor Ortega and Giap—working together with the support of an unwitting American general—hunt them down.

The star-crossed lovers travel across Laos to Cambodia’s Angkor Wat; to Bangkok, Thailand, and then to Burma’s Golden Triangle where Ethan and Tuyen face a ruthless drug lord and his gang. In the rainforests of Burma, Ethan also discovers Ortega and Giap have set in motion a massive assault on his Marine unit’s remote base in South Vietnam with the goal of killing the man he admires most, Colonel Edward Price, who is the only one who believes Ethan is innocent. Ethan must risk everything to save Price and his fellow Marines. Will he succeed?

About the author: Lloyd Lofthouse, a former U.S. Marine and Vietnam veteran, served in Vietnam as a field radio operator in 1966. Back home, Lloyd never talked about the war and suffered from PTSD. In the early 1980s, he confronted his demons by writing about his war experiences in an MFA program. Lloyd earned a BA in journalism, and then worked as a public school teacher and as a maître d’.

Running with the Enemy started as a memoir and then evolved into fiction. His short story, A Night at the “Well of Purity”, named a finalist of the 2007 Chicago Literary Awards, was based on an event Lloyd experienced in Vietnam. His first novel My Splendid Concubine has earned ten honorable mentions in general fiction. He is married to the author Anchee Min.

Thanks to Premier Virtual Author Book Tours and the author for a review copy of this book.
Submitted to the 2013 Historical Fiction Reading Challenge