Cozy Mystery Cats and Dogs: Do You Have a Favorite?

Have any cozy mystery novels with cats or dogs on the cover? Makes me think that cozy readers are also pet lovers, whether they read contemporary mysteries or historical mysteries.

Take a look at a sample of book covers with felines and dogs perched on the covers. 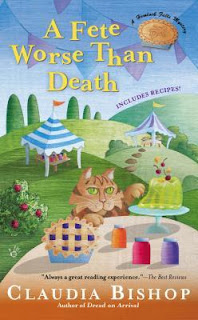 A Fete Worse Than Death by Claudia Bishop. Someone gets killed during the rivalry of crafters at a Spring Fete in upstate New York. No mention of the cat! 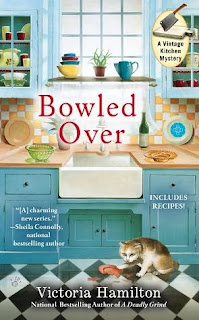 Bowled Over by Victoria Hamilton, with a Fourth of July contemporary setting. Vintage kitchenware and cookbook collector finds the body of a former friend.

The Christie Curse by Victoria Abbott, set in New York in 1926, involves a sleuth hunting down rare mystery novels for a book collector. 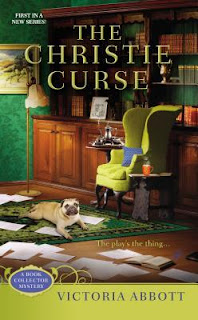 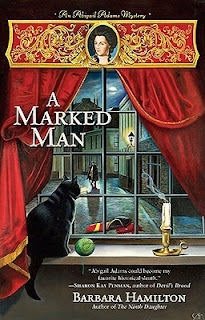 A Marked Man by Barbara Hamilton, set in colonial America. The book description doesn't mention the role of the cat on the cover.

Do animals or pets on the cover persuade you to pick up a book? Let's see what the publisher's descriptions have to say about these books.I think there are animals in all these mysteries but they are not crucial to the plot as some other cats/dogs are in other books.

My favorite dog centered mystery series, for example include Spencer Quinn's Chet and Bernie mysteries, Chet being the dog in a detective duo.

I reviewed The Dog Who Knew Too Much by Spencer Quinn two years ago and liked it so much, especially Chet the dog, that I went back and read the others in the series. The stories are told by Chet, and they are amusing as well as charming! Quinn surely knows how to get us into the mind of a dog!

Another fave dog mystery is Ten Little Bloodhounds by the late Virginia Lanier. The series is excellent! The bloodhounds of course help Jo Beth Sidden find the clues.


The first mystery series I read that featured animals was Susan Conant's Dog Lovers Mysteries with her two Alaskan malamutes. I reviewed Brute Strength a couple years ago, and of course I've read all the books in the series, at least 19 of them.  Here's another one that's good:

In Animal Appetite, the 10th in the series, Holly Winter and her two Alaskan Malamutes in Cambridge, Mass. find the murderer of one of their own - a dog lover.

What about cats as the main feature in mystery novels, by writers such as
Rita Mae Brown and Lilian Jackson Braun and their talking detective cats;
Sofie Kelly and her Magical Cats,
Miranda James and her librarian's cat,
Leann Sweeney and her Cats in Trouble.
And there are so many, many more with a cat theme.