This post lists new books and links up to It's Monday; What Are You Reading? at Book Journey;  to Mailbox Monday hosted by Dolce Bellezza; and to Stacking the Shelves by Tynga's Reviews.

Two arrivals in my mailbox from the publisher and the author:

The Crossing Places: A Ruth Galloway Mystery (2009)
"When she’s not digging up bones or other ancient objects, quirky, tart-tongued archaeologist Ruth Galloway lives in a remote area called Saltmarsh near Norfolk, land that was sacred to its Iron Age inhabitants - not quite earth, not quite sea.

When a child’s bones are found on a desolate beach nearby, Detective Chief Inspector Harry Nelson calls Galloway for help. Nelson thinks he has found the remains of Lucy Downey, a little girl who went missing ten years ago. Since her disappearance he has been receiving bizarre letters about her, letters with references to ritual and sacrifice.

The bones actually turn out to be two thousand years old, but Ruth is soon drawn into the Lucy Downey case and into the mind of the letter writer, who seems to have both archaeological knowledge and eerie psychic powers. Then another child goes missing and the hunt is on to find her.

As the letter writer moves closer and the windswept Norfolk landscape exerts its power, Ruth finds herself in completely new territory – and in serious danger." (publisher's description). 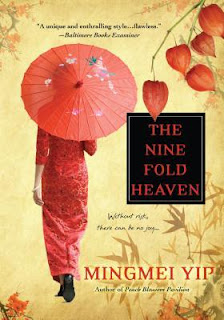 The Nine Fold Heaven by Mingmei Yip  (June 25, 2013)
"Mingmei Yip draws readers deeper into the exotic world of 1930s Shanghai first explored in Skeleton Women, and into the lives of the unforgettable Camilla, Shadow, and Rainbow Chang.
When Shadow, a gifted, ambitious magician, competed with the beautiful Camilla for the affections of organized crime leader Master Lung, she almost lost everything. Hiding out in Hong Kong, performing in a run-down circus, Shadow has no idea that Camilla, too, is on the run with her lover, Jinying--Lung's son.
Yet while Camilla and Shadow were once enemies, now their only hope of freedom lies in joining forces to eliminate the ruthless Big Brother Wang. Despite the danger, Shadow, Camilla, and Jinying return to Shanghai. Camilla also has her own secret agenda--she has heard a rumor that her son is alive. And in a city teeming with spies and rivals--including the vengeful Rainbow Chang--each battles for a future in a country on the verge of monumental change." (publisher's description).

An adventure novel/mystery that I bought: 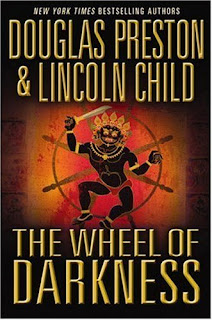 The Wheel of Heaven by Douglas Preston and Lincoln Child ( August 28, 2007).
FBI Special Agent Pendergast has taken Constance on a whirlwind Grand Tour, hoping to give her closure and a sense of the world that she's missed. They head to Tibet, where Pendergast intensively trained in martial arts and spiritual studies. At a remote monastery, they learn that a rare and dangerous artifact the monks have been guarding for generations has been mysteriously stolen. Pendergast agrees to take up the search.

The trail leads him and Constance to the maiden voyage of the Queen Victoria, the world's largest and most luxurious passenger liner-and to an Atlantic crossing fraught with terror. (publisher's description)