Welcome to the Sunday Salon!This post lists new books and links up to It's Monday; What Are You Reading? at Book Journey;  to Mailbox Monday hosted by Dolce Bellezza; and to Stacking the Shelves by Tynga's Reviews.

Our cool summer continues, making it feel like an extension of spring. Not that I mind. Everything seems greener in front of my window and I keep that birdbath full for winged bathers!

I read four books last week, a lot for me, and reviewed three:
I Never Promised You a Goodie Bag by Jennifer Gilbert, a memoir
Gaijin Cowgirl by Jame DiBiasio, an adventure thriller
The Original 1982 by Lori Carson, women's fiction.

I finished There Was An Old Woman by Hallie Ephron, a mystery that started out really well but ended as if it was rushed and not well thought through. The ending was a bit puzzling, as only two of the people involved in the crimes were named, while a third simply was not mentioned at all, just fell off the radar, so to speak, when it was clear to me he was very much part of the crime. I reviewed an uncorrected proof, so hopefully the editors caught this unfinished business for the final copy.

A few review books came in the mail: 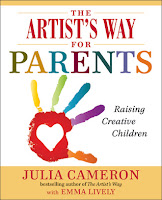 The Artist's Way for Parents: Raising Creative Children by Julia Cameron and Emma Lively is to be published August 13, 2013 by Tarcher.  I requested a galley and was lucky to get it. The book is described as " an ongoing spiritual toolkit that parents can ener - and reenter- at any pace and at any point in their children's early lives." It gives tips and exercises for developing creative aspects, such as self-expression, focus, inventiveness, connection, and even safety.

The Last Summer of the Camperdowns by Elizabeth Kelly was published June 3, 2013 by Liveright and came as an ARC.
Book description: The book introduces Riddle James Camperdown, the twelve-year-old daughter of the idealistic Camp and his manicured, razor-sharp wife, Greer. It's 1972, and Riddle's father is running for office from the family compound in Wellfleet, Massachusetts. Riddle has her hands full juggling her eccentric parents. When she accidentally witnesses a crime close to home, her confusion and fear keep her silent. As the summer unfolds, the consequences of her silence multiply. Another mysterious and powerful family, the Devlins, slowly emerges as the keepers of astonishing secrets that could shatter the Camperdowns. As an old love triangle, bitter war wounds, and the struggle for status spiral out of control, Riddle can only hope for courage to reveal the truth.

Courting Greta by Ramsey Hootman is to be published June 18, 2013 by Gallery.  Book description: Samuel Cooke knows most women wouldn't give him a second glance even if he were the last man on earth. He's the cripple with the crutches, the nerdy computer genius every female past puberty feels compelled to mother. So when he leaves his lucrative career to teach programming to high schoolers, romance definitely isn't on his radar.
Perhaps that's why Greta Cassamajor catches him off guard. The sarcastic gym coach with zero sense of humor is no beauty - not even on the inside. But an inexplicably kind act toward Samuel makes him realize she is interesting....

Operation Saladin by Roger Croft is the sequel to The Wayward Spy, and published May 2, 2013 by CreateSpace.
The book involves espionage and suspense with an MI6 operative in the Middle East.

Restrike by Reba White Williams, a mystery published June 1, 2013 by Delos. I requested a review copy from the author and was surprised by a copy.Thanks!
Book description: Money and murder go hand in glove in the rarified art world of Reba White Williams’ first novel. Cousins Coleman and Dinah Greene moved from North Carolina to New York after college to make their mark on the art world. When billionaire Heyward Bain arrives, announcing plans to fund a fine print museum, Coleman plans to publish an article about him. Dinah hopes to sell him enough prints to save her gallery. At the same time, swindlers, attracted by Bain’s lavish spending, invade the print world to grab some of his money.
When a print dealer dies in peculiar circumstances and after one of Coleman’s editors is killed and Coleman is attacked, Coleman becomes even more determined to discover the truth about Bain.

Three Lives of Tomomi Ishikawa by Benjamin Constable, published June 4, 2013 by Gallery.
Book description: What writer Benjamin Constable needs is a real-life adventure wilder than his rampant imagination. And who better to shake up his comfortable Englishman-in-Paris routine than the enigmatic Tomomi “Butterfly” Ishikawa, who has just sent a cryptic suicide note? She’s planted a slew of clues—in the pages of her journal, on the hard drive of her computer, tucked away in public places, under flowerpots, and behind statues. Heartbroken, confused, and accompanied by an imaginary cat, Ben embarks upon a scavenger hunt leading to charming and unexpected spaces, from the hidden alleys of Paris to the cobblestone streets of New York City.
But Butterfly’s posthumous messages are surprisingly well informed for the words of a dead person, and they’re full of confessions of a past darkened by insanity, betrayal, and murder. The treasures Ben is unearthing are installments of a gruesome memoir. Now he must draw a clear line between the real and surreal if he is to save himself, Butterfly, and what remains of their crazy and amazing friendship

These all look pretty good to me, as they all have some element of mystery, which I love.