Book Review: A Tale for the Time Being by Ruth Ozeki 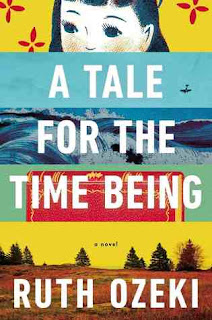 My comments: Nao, the young Japanese writer of a diary found by Ruth will break your heart several times over during the course of the novel. A victim of extreme bullying in school, she contemplates suicide, then meets her great-grandmother, a 104-year-old Buddhist nun who will have a great effect on her life. Nao's grand-uncle Haruki #1 will also grab your sympathies through his diaries, the writings of a conscripted kamikazi pilot on the hardship and brutalities of his military life. If I could give this novel a higher rating than 5, I would.

The characters are so real that you easily become involved in their lives and care deeply about what happens to them. The book also combines in its mixture, religion, quantum physics, history, biology, dreams and paranormal events, and philosophy.  Kudos to an outstanding author.

“A time being is someone who lives in time, and that means you, and me, and every one of us who is, or was, or ever will be.”

"In Tokyo, sixteen-year-old Nao has decided there’s only one escape from her aching loneliness and her classmates’ bullying. But before she ends it all, Nao first plans to document the life of her great grandmother, a Buddhist nun who’s lived more than a century. A diary is Nao’s only solace—and will touch lives in ways she can scarcely imagine.

Across the Pacific, we meet Ruth, a novelist living on a remote island who discovers a collection of artifacts washed ashore in a Hello Kitty lunchbox—possibly debris from the devastating 2011 tsunami. As the mystery of its contents unfolds, Ruth is pulled into the past, into Nao’s drama and her unknown fate, and forward into her own future.

Full of Ozeki’s signature humor and deeply engaged with the relationship between writer and reader, past and present, fact and fiction, quantum physics, history, and myth, A Tale for the Time Being is a brilliantly inventive, beguiling story of our shared humanity and the search for home."

Email ThisBlogThis!Share to TwitterShare to FacebookShare to Pinterest
Labels: A Tale for the Time Being, Book review, fiction, Japanese Literature Challenge 7, Ruth Ozeki