Book Review: This Is Paradise by Kristiana Kahakauwila 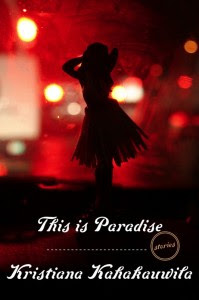 "Tourists," he said. They remind me of crabs. The color of their skin." Cameron nodded in agreement, then realized he didn't feel the same. He knew tourists by their choice of car, not their skin color. Locals didn't drive convertibles; they drove trucks. With air-conditioning.(p. 94)

My comments: I was interested in Kristiana's stories of Hawaii as I had visited Oahu once some years back, though I never had a chance to talk much with the locals or the expatriates who lived permanently on the islands. I thought it was Paradise, of course, the lovely beaches and scenery, the green of the hills. But in Paradise, as Kristiana shows us, there might be more going on underneath.

I was reminded of this when I recall my trip to Oahu, running onto a deserted beach near the North Shore, eager to plunge up to my knees in the waves. Luckily for me, a Japanese Hawaiian in diving gear came out of the water at that moment and warned me to stay out of the water because of dangerous undertow that could pull me in and under.

Paradise can be deceptive, as Kristiana's stories tell us. There is danger for a young American tourist though she is told that the personable tourist she befriends in the bar is an ex-convict whose prison tattoos are obvious. People on the island themselves don't always have lives of luxury and comfort as a paradise could suggest. There are cock fighters and breeders and the dangers of rivalry and competition among these groups. There are hotel housekeepers who see what's going with tourists. as well as local career girls who have been educated on the U.S. mainland and have returned to the island; and a mixture and assortment of residents who make the Hawaiian islands no longer purely Hawaiian.

An enlightening collection of stories of Hawaii today. And also of the local Hawaiians whose lives and problems are similar to those of anyone anywhere in the world.

Publisher's description:
Intimately tied to the Hawaiian Islands, This Is Paradise explores the relationships among native Hawaiians, local citizens, and emigrants from (and to) the contiguous forty-eight states. There is tension between locals and tourists, between locals and the military men that populate their communities, between local Hawaiian girls who never leave and those who do for higher education and then return.

The author Kahakauwila is a careful observer of her protagonists’ actions–and, sometimes, their inaction. Her portrayal of people whose lives have lost their center of gravity is acute, often heartbreaking, and suffused with a deeply felt empathy.

For more reviews of This Is Paradise, visit the tour schedule. 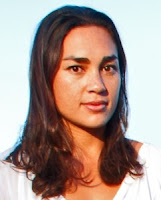 KRISTIANA KAHAKAUWILA, a native Hawaiian, was raised in Southern California. She earned a master’s in fine arts from the University of Michigan and a bachelor’s degree in comparative literature from Princeton University. She has worked as a writer and editor for Wine Spectator, Cigar Aficionado, and Highlights for Children magazines and taught English at Chaminade University in Honolulu.
She is an assistant professor of creative writing at Western Washington University.