Book Beginnings: A Once Crowded Sky by Tom King 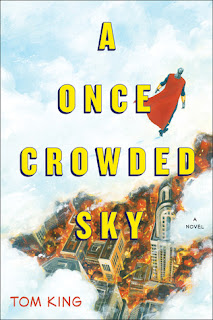 Book beginning: Chapter 1 is a comic featuring a hero
Chapter 2:  Ultimate, The Man With The Metal Face #566


Their lives are violence. Month after month after month, they fight a wonderful war, play a wonderful game, forever saving the next day from the next dastardly villain, the next meteor falling from the sky, the next giant monster emerging from his cave, his rock-fists swatting at the heroes rising into the air around him, and Pen slides the spatula under the half-cooked pancake and flips it over. The raw underside splatters wide and spreads across the pan. The circle starts to lose its shape as it falls into itself.


A hand tugs him, pulls at Felix' shirt, tugs him, and he rolls backward on his back a few inches, pulled away from the fire, which has begun to spread.

Book description:  "A Once Crowded Sky fuses the sensibility of bombastic, comic-book-style storytelling with modern literary fiction to bring to life a universe of super men stripped of their powers, newly mortal men forced to confront danger in a world without heroes.
The superheroes of Arcadia City fight a wonderful war and play a wonderful game, forever saving yet another day. However, after sacrificing both their powers and Ultimate, the greatest hero of them all, to defeat the latest apocalypse, these comic book characters are transformed from the marvelous into the mundane.

After too many battles won and too many friends lost, The Soldier of Freedom was fine letting all that glory go. But when a new threat blasts through his city, Soldier, as ever, accepts his duty and reenlists in this next war. Without his once amazing abilities, he's forced to seek the help of the one man who walked away, the sole hero who refused to make the sacrifice--PenUltimate, the sidekick of Ultimate, who through his own rejection of the game has become the most powerful man in the world, the only one left who might still, once again, save the day." (publisher)

What do you think of this novel featuring comic book heroes without their powers?
at August 02, 2013

A superhero book? Hmmm...I'll have to check this out.

When you're making pancakes it's definitely not the time to start philosophizing! Also, lucky Felix for being pulled away from a fire! I love the cover on this one, it sort of has a vintage-y feel to it! Thanks for sharing, hope you have a good weekend :)
My Friday Post
Juli @ Universe in Words

It's an interesting concept but not one for me. Well maybe on audio it would be good.

It took me forever to find how to leave a comment. I don't know if I could find my way back here again.

Funny idea for a book. I've never read a graphic novel, but this one might be worthwhile.

I had heard good things about this book. I think that the plot has enormous potential. As is often the case with this genre, this has the potential to be great, or if handled incorrectly a disaster.