Book Review: The Sound and the Furry by Spencer Quinn

Also submitted to: Teaser Tuesdays hosted by MizB; choose sentences from your current read and identify author and title for readers.  First Chapter, First Paragraph is hosted by Bibliophile by the Sea. 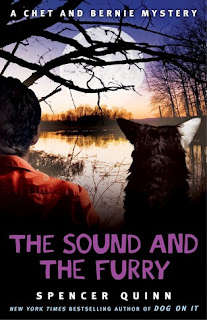 
"One thing's for sure," the lawyer said, handing Bernie our check," you earned every cent."

Bernie tucked the check in - oh, no - the chest pocket of his Hawaiian shirt, just about his nicest Hawaiian shirt, with the hula dancers and the trombones, but that wasn't the point. The point was we'd had chest pocket problems in the past, more than once. And possibly more than twice, but I wouldn't know, since I don't count past two. What I do know is that checks have a way of falling out of chest pockets.

"What's he barking about?" the lawyer said.

My comments: That's Chet talking, the 100-pound plus dog who, with his human partner, Bernie, make up the detective duo, Chet and Bernie. Chet narrates the stories and we see his limitations and also his strengths in the partnership. He can't communicate in words with Bernie but he is astute, a great sniffer, and knows lots of things Bernie doesn't. With Bernie's human smarts, together they make good PIs.

In The Sound and the Furry, the pair are asked to find a missing inventor, Ralph, the reclusive brother of a criminal Chet and Bernie have put behind bars. They leave the dry desert Chet is familiar with and head down to Louisiana and the bayou. It takes some getting used to for Chet, all that water, but he takes it in stride, even swimming in the bayou a couple of times.

And what I had feared happened. Chet gets into big trouble in that bayou, and I won't say how, but it's spectacular and nail-bitingly suspenseful. The big dog meets more than his match. The duo solve the mystery though, with Bernie getting involved in more than he had bargained for. But as Chet explains about Bernie being able to figure things out,
" Bernie handles the so therefores. I bring other things to the table."

By the way, this is the sixth book in the series, but they can be read in any order.

Book description:
Chet and Bernie head to Louisiana after they run into an old criminal friend they helped send to prison, Frenchie Boutette. Frenchie needs Bernie and Chet’s help to find his missing brother, Ralph, who has disappeared from his houseboat. A reclusive inventor, Ralph is the only law-abiding member of his family. The Boutette family has a long running feud with the no-good Robideaus and it seems as if Ralph’s disappearance is connected to a dispute over a load of stolen shrimp. But when Chet uncovers a buried clue, the investigation heads in a dangerous direction and a conspiracy involving the oil business. Visit Chet's website: Chet the Dog.