The Mountain of Light: a Novel by Indu Sundaresan 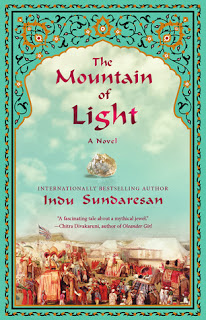 
The girl reached on tiptoe and kissed Jindan's arm, somewhere above the Kohinoor, and then she fled, the sound of her footsteps sucked into the pile of the dhurries on the floor.


June 1817
The midday sun leaned over to place its fiery kiss upon the Shalimar Gardens in Lahore, four and a half miles east of the fort and walled city. The blazing light wavered into a haze around the almond, guava, and mango trees, and except under the trees where it could not penetrate, all shadows leached into the blistering ground.

Publisher description:
"A novel based on the tumultuous history of a legendary 186-carat diamond and the men and women who possessed it. It is the “Mountain of Light”—the Kohinoor diamond. Its origins are the stuff of myth, but for centuries this spectacular gem changes hands from one ruler to another in India, Persia, and Afghanistan.

In 1850, the ancient stone is sent halfway around the world where it will play a pivotal role in the intertwined destinies of a boy-king of India and a young queen of England—a queen who claims the Mountain of Light and India itself for her own burgeoning empire, the most brilliant jewels in her imperial crown. The Mountain of Light is a story of loss and recovery, sweeping change and enduring truth, wrapped around the glowing heart of one of the world’s most famous diamonds."

Sounds like this book has the potential to be very good. I tend to like stories and films that center around an object, but of course are really about people.

Oh how funny, my Friday 56 also has to do with the Kohinoor diamond! Mine is a contemporary mystery, The Final Cut, by Catherine Coulter and J.T. Ellison. I may have to check out the book you're reading.