A Cold and Lonely Place by Sara J. Henry is a dark mystery read fit for a cold though not lonely winter. 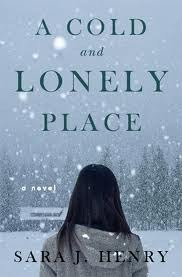 The novel is set in a small town in the Adirondack Mountains, upper New York State. It is cold in the winter and a lonely place for Tobin, an outsider who has made his home in this out of the way place, know for winter sports and its annual Winter Festival.

A freelance newspaper reporter, Troy Chance, is on scene at Saranac Lake to cover the ice cutting for an ice palace to be built for the Saranac Lake Winter Carnival. Works stops when a body is found in the frozen lake, encased in ice. Everyone recognizes it as Tobin, the popular outsider.

Troy works with Tobin's sister Win, who comes into town to find out the whys and hows of Tobin's death. Through her research and interviews for a series of stories for the local paper, Troy takes risks several times to find out more about Tobin's background, the death by drowning of his older brother Trey, and his life before and after he arrives in the Adirondacks. This extensive research helps solve the sad mystery of the young man's death.

I thought this mystery was about the tragic results in a family with "toxic" parents who ignored and actively worked against the best interests of their children. It was easy to like Troy, the young reporter turned sleuth, and I hope to read more about her in the next books in the Troy Chance series.

This is a reprint of an earlier post.
I received a review copy of the book from the publisher.

It's so hard for me to read about parents who are less than they should be. I see at school, where I've taught for almost thirty years, and I can't bear to see children's pain. My son teases me about dressing him in clothes which were from Nordstrom rather than KMart, and I say, "Shoot me for loving you too much." I guess it's all about balance, right?