Book Review: The Pieces We Keep by Kristina McMorris 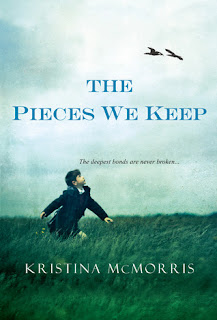 About the book:
Two stories are told simultaneously - one set in contemporary U.S, and the other in London in the late 1930s and early 1940s before and during WWII.

In the U.S. a widow, Audra, tries to find the source and cause of her seven-year-old son Jake's vivid and disturbing nightmares. Jake is entranced by fighter planes and soldiers from the war. In London in the late 1930s, Vivian, the daughter of a U.S. diplomat, falls in love with Isaak, who wants to leave for Germany to take his family from there to safety in Switzerland before war breaks out. Vivian willingly but unwittingly begins gathering information from her father's diplomatic files to give to Isaak.

My comments: This is an historical novel/historical romance that deftly weaves the past and the present and fact with fiction - WWII German spies/saboteurs were arrested and executed in the U.S. during the war; and there is a true case of a young child with nighttime dreams of being a pilot during WWII that brings up questions about the truth or non-truth of reincarnation.

The present and past stories are told in alternate chapters. I would have liked though to see more markers/information at the beginning of each chapter to lead us smoothly back into each story. This was not a problem in the second half of the book, however, after I had become thoroughly familiar and involved with all the characters.

Recommendation: Excellent research and characterization, especially of Audra and her young son Jake in modern day Portland, Oregon who find themselves linked to Vivian, Isaak, and the characters in the WWII drama. I expected a traumatic ending but it turned out to be a satisfying one!

Objective rating: 4/5
Thanks to the author for sending an ARC for an early read/review.

This one caught my eye during our weekly updates. I enjoy the going back and forth over time, but you're right: it does have to be done deftly, so that the transitions are seamless.

Thanks for visiting my blog this morning.

Lovely review, Harvee. This sounds like a novel I'd enjoy as well.

The connection with World War II makes this particularly interesting. I know only a little bit about bit about the story of the Germain saboteurs caught in the United States but I think that in and of itself that was a tale worth knowing about.

I'll be reading this one soon, so I'm glad to see you enjoyed it. I can't get enough of these past/present books right now.

I'm glad you enjoyed this book. I am currently reading it and like it so far. Great review Harvee!