Teaser Tuesdays  is hosted by MizB; choose sentences from your current read and identify author and title for readers. First Chapter, First Paragraph is hosted by Bibliophile by the Sea. 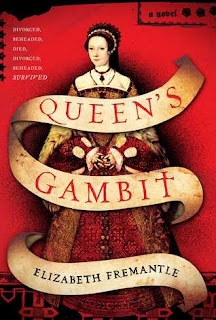 
The notary smells of dust and ink. How is it, Larymer wonders, that when one sense blunt another sharpens. He can pick up the scent of everything, the reek of ale on the man's breath, the yeasty whiff of bread baking in the kitchens below, the wet-dog stink of the spaniel curled up in the hearth. But he can see little, the room swims and the man is a vague dark shape leaning over the bed with a grimace of a smile.

Publisher description:
"Widowed for the second time at age thirty-one Katherine Parr falls deeply for the dashing courtier Thomas Seymour and hopes at last to marry for love. However, obliged to return to court, she attracts the attentions of the ailing, egotistical, and dangerously powerful Henry VIII, who dispatches his love rival, Seymour, to the Continent. No one is in a position to refuse a royal proposal so, haunted by the fates of his previous wives, two executions, two annulments, one death in childbirth, Katherine must wed Henry and become his sixth queen.

Katherine has to employ all her instincts to navigate the treachery of the court, drawing a tight circle of women around her, including her stepdaughter, Meg, traumatized by events from their past that are shrouded in secrecy, and their loyal servant Dot, who knows and sees more than she understands. With the Catholic faction on the rise once more, reformers being burned for heresy, and those close to the king vying for position, Katherine's survival seems unlikely. Yet as she treads the razor's edge of court intrigue, she never quite gives up on love."

Katherine Parr was Henry VIII's last queen, one who survived his reign and married again. I am eager to read this one.
at November 26, 2013

This intro definitely has potential to be great. I'd read more. Thanks for joining in and have a nice Thanksgiving as well Harvee.

I like that opening… and am in the mood for historical fiction. Hope you enjoy it!

This sound interesting. I enjoy the love stories and drama of this time period. I would keep reading.

Oh, I love the intro and the blurb...and that cover! Awesome. Thanks for sharing...and for visiting my blog. Enjoy the holidays.

sounds like a really good book. Have a happy Thanksgiving. kelley—the road goes ever ever on

You did a "56"! I won this book on Always With a Book, and now I'm eagerly awaiting some time to read it! It sounds like an engrossing story of survival.

Ha, ha, seems I did, Suko. Thanks for pointing it out. I added the word "teaser" to clarify. Think I'm catching the flu and am not super alert today :)

I like the sound of this book. Katherine Parr has always intrigued me, as the only woman to survive Henry VIII without losing either her marriage or her life. (Whether she would have if he had lived longer is another question.) I think this is going on my "someday" list.

Sounds like it's written beautifully. And as Suko pointed out, love the 56!! ;-)

The opening paragraph didn't grab me but the book description did. Hope you enjoy,

This goes sound great, I have a copy as well and can't wait to dive in.

I love this time period and would keep reading.

The excerpt from the first chapter was very good. It seems to exhibit a genuine feel for the time. I look forward to reading what you think of the book when finished.