Book Review: Death of a Nightingale by Lene Kaaberbol and Agnete Friis 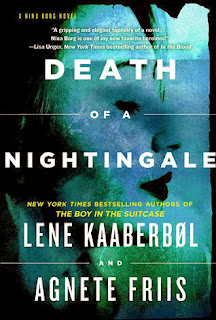 
"But not everyone looked at Oxana and Olga with such adoration. Some eyes were lowered when they turned around in the schoolroom. Whispering would suddenly cease when they walked by and later start up again behind their backs." (Ukraine, 1934), p. 143

Two young girls, Oxana and Olga, live under Stalin's socialist rule in the Ukraine in the 1930s. One joins the party and becomes unpopular when the authorities begin to question and arrest people about breaking rules and hoarding food during a time of famine. Oxana is suspected of being the nightingale - the one that "sings".


The most obvious reason, of course, was that she took off and left the country with her daughter a few hours after she had been questioned. But there were other suspicious circumstances as well. Even though her husband had disappeared four days before he was found, the hadn't reported him missing." (present day, p. 70)

In present day Denmark, Natasha is wanted by the  police for the death of her husband. She is desperate to retrieve her young daughter from the Danish authorities and to escape with her from the country. Dansh Red Cross nurse Nina Borg is concerned about the safety of mother and child.

What do these two stories have to do with each other - sisters in 1930s Ukraine and a Ukranian mother and daughter in modern day Denmark?  There are surprises and twists in the novel as the two plots slowly mesh together into a tale of old betrayal and modern day revenge. I loved this crime fiction, as much as I liked the authors' first book, Boy in the Suitcase. A terrific story of how the past can continue on and spread its tentacles into the future.

Publisher's description:
"Nina. Natasha. Olga. Three women united by one terrifying secret. But only one of them has killed to keep it. Natasha Doroshenko, a Ukrainian woman who has been convicted of the attempted murder of her Danish fiancé, escapes police custody. That night, the body of Michael, the ex-fiancé, is found in a car, and the manhunt for Natasha escalates.

Danish Red Cross nurse Nina Borg has been following Natasha's case for several years now, since Natasha first took refuge at a crisis center where Nina works. Nina just can't see the young Ukrainian mother as a vicious killer. But in her effort to discover the truth, Nina realizes there is much she didn't know about this woman and her past. The mystery has long and bloody roots, going back to a terrible famine that devastated Stalinist Ukraine in 1934, when a ten-year-old girl with the voice of a nightingale sang her family into shallow graves."

Have you read any in the Nina Borg series?

Thanks to Soho for a review copy of this book.