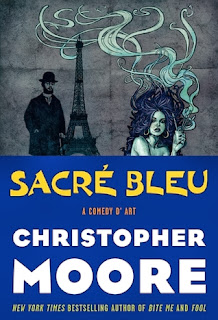 
This is a story about the color blue. It may dodge and weave, hide and deceive, take you down paths of love and history and inspiration, but it's always about blue.


On the day he was to be murdered, Vincent Van Gogh encountered a Gypsy on the cobbles outside the inn where he'd just eaten lunch. "Big hat," said the Gypsy.


"Well, that explains it, said the woman. "The Louvre's a little pious, isn't it? Can't throw a round of darts in there without scoring three Madonnas and a baby Jesus. And Raphael was a lazy little fop." (ch. 5)