Home of the Braised by July Hyzy 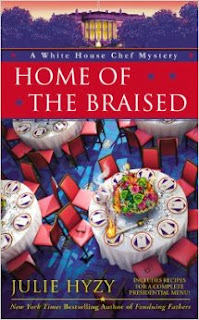 Home of the Braised: A White House Chef Mystery by Julie Hyzy is the seventh in the series of cozy mysteries by the author. It's due out on January 7, 2014.

Here is the publisher's description:
"With the pressure of an upcoming state dinner that could make or break the president’s foreign policy, White House executive chef Olivia Paras has little time to focus on her wedding plans—or to catch a murderer…

Tensions are running high as the White House staff adjusts to a new chief usher and prepares for a high-stakes state dinner. But things go disastrously wrong when the secretary of defense is found dead in his home, seemingly killed during a break-in.

At the same time Olivia’s fiancé, Gav, is looking into the mysterious murder of an old friend. Is there a connection? Despite an increase in security following the secretary’s death, Ollie learns the president is in imminent danger at the dinner and must do everything to get to him—before it’s too late…" (Amazon)

Email ThisBlogThis!Share to TwitterShare to FacebookShare to Pinterest
Labels: cozy mystery, Home of he Braised, mystery, Waiting on Wednesday