Book Review: While We Were Watching Downton Abbey by Wendy Wax 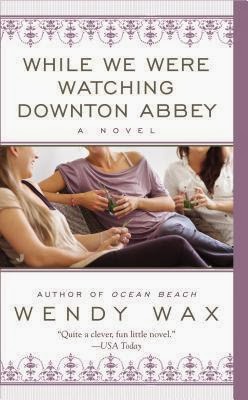 About the book: The novel is about three women and a concierge in an upscale apartment building in Atlanta, Georgia, modern time, who meet each other as part of the concierge's weekly Sunday event - Watching  the TV series, Downton Abbey, while having drinks and elaborate hors d'oeuvres in the building club room. These four all have their problems, however.

Samantha is married to a wealthy businessman who she feels married her out of pity and not love. Claire is a divorced mom with an 18-year-old son in college, but she believes she is failing as a writer, her chosen profession. Brooke, also divorced but with two daughters ages 5 and 7, has a self-confidence that is almost nil after her husband walked out and later moves into the same apartment building with his mistress. Ed Parker, the British concierge, relies on his uncle back in Britain for helpful advice in making his new concierge business a success.

How they all help each other cope with their problems and upcoming crises is the crux of the novel. The glue that holds their relationships together is their weekly get-togethers to watch Downton Abbey, from the first series onward.

My comments:  Great characterization, story, and plot situations made this a very enjoyable read.  The plot was well crafted and the colorful, realistic characters made the novel entertaining and lively. I highly recommend it.

Thanks to the publisher for a review copy of this book for their book tour.