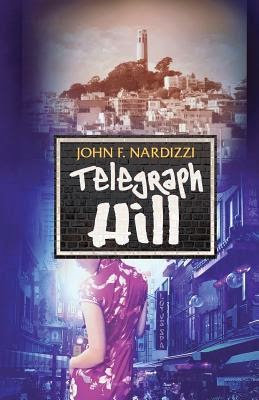 
Someone was watching. She opened her eyes. A black shape stood at the edge of the dell. One of the Triad soldiers. He peered through the trees, but he wasn't sure where to go. Locked his dark eyes on a clump of trees and undergrowth where she lay. He stepped toward Tania. (ch. 11)

Book description:  John Nardizzi's Telegraph Hill introduces private detective Ray Infantino searching for a missing girl named Tania. The case takes him to San Francisco, the city he abandoned years ago after his fiance was murdered. Thrust into his old city haunts, Ray finds that Tania may not be lost at all. Tania saw a murder; and a criminal gang, the Black Fist Triad, wants to make sure she never sees anything again.

Ray enlists help from an old flame, Dominique, but now he has three women on his mind. Meeting with various witnesses-ex-cops, prostitutes, skinheads-he relentlessly tracks the evidence. But the hunt for Tania fires his obsession with avenging the murder of his fiance.
When the triad retaliates, and blood begins to flow, Ray must walk the knife edge between revenge and redemption on the streets of San Francisco. (publisher)

My comments: Quick and fast trips from Boston to San Francisco into the haunts of the Triads who control much of the underbelly of the city. PI Infantino is hired to find a girl missing from her home for over ten years. Infantino's mission is dangerous and there is thrilling action and near escapes as he attempts to find and then hide the girl Tania.

Fast paced novel with good descriptions of San Francisco as Infantino traverses it to find the missing girl. A good plot with an alluring setting. I enjoyed this quick and exciting read.

I received a complimentary copy of this book for review.
at March 29, 2014

Harvee, this does sound like an exciting book! Terrific review--and happy Saturday to you!

The book sounds good and the San Francisco setting has me interested.Glad you enjoyed it!

Good review! I love suspense mysteries so this would be right up my alley. Thanks for sharing it.

Sounds fast paced and I like the San Francisco setting.

Sounds good. I like that it was good and fast paced. I have never been to San Francisco. It will be fun to "see" it through the book.