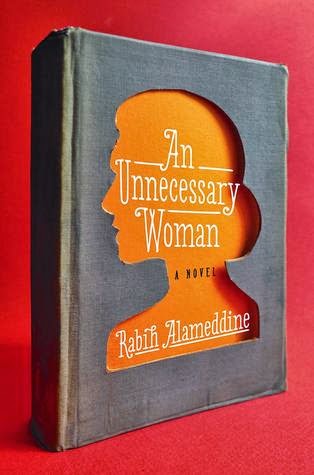 
You could say I was thinking of other things when I shampooed my hair blue, and two glasses of red wine didn't help my concentration.

Book description:
Celebrates the singular life of an obsessive introvert, revealing Beirut’s beauties and horrors along the way.
Aaliya Sohbi lives alone in her Beirut apartment, surrounded by stockpiles of books. Godless, fatherless, divorced, and childless, Aaliya is her family’s "unnecessary appendage.” Every year, she translates a new favorite book into Arabic, then stows it away. The thirty-seven books that Aaliya has translated have never been read—by anyone. After overhearing her neighbors, "the three witches,” discussing her too-white hair, Aaliya accidentally dyes her hair too blue.
In this breathtaking portrait of a reclusive woman’s late-life crisis, readers follow Aaliya’s digressive mind as it ricochets across visions of past and present Beirut. Insightful musings on literature, philosophy, and art are invaded by memories of the Lebanese Civil War and Aaliya’s volatile past. As she tries to overcome her aging body and spontaneous emotional upwellings, Aaliya is faced with an unthinkable disaster that threatens to shatter the little life she has left.
A love letter to literature and its power to define who we are, the gifted Rabih Alameddine has given us a nuanced rendering of a single woman's reclusive life in the Middle East. (goodreads)

Based on the first paragraph and the book description, would you continue reading?