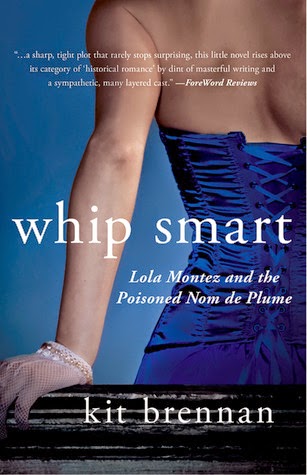 The main character in the series is based on the real life Victorian character, Lola Montez.


The Return - 1844
Teeth chattering, arms clasping my body for warmth, I gazed out the window at snow and more snow. I seemed to have spent my whole life sitting motionless in freezing cold post-coaches, rumbling along! At least we were now headed south. Fool that I am.
What a ludicrous idea it had been, trying to get to St. Petersburg in the depths of winter. I'd convinced myself that Imperial Russia would become my spirited style and flamboyant nature, that perhaps I could talk my way into a dancing engagement at the largest, most prestigious theatre in the city - a venue that would attract royalty, exalted military types, and the creme de la creme of Russia's dancer and artists...

Goodreads book description:
Kit Brennan’s second in the Whip Smart series opens with the ever-headstrong Lola Montez careening around Europe, on the run from the haunting memories of Spain and the wild adventure that nearly cost her life.

It is 1844. Lola encounters celebrated pianist and composer Franz Liszt, who encourages her to set her sights on Paris to establish her dancing career. The night that Lola performs her racy Spider Dance at the Paris Opéra, she meets quite possibly the man of her dreams: Henri Dujarier, co-owner of La Presse newspaper.

Lola seems on the verge of breaking Victorian tradition and actually having it all, but forces are at work to keep Lola and Henri apart. Deadly threats and rumors turn into reality, as shadowy figures stop at nothing to sabotage Lola’s new endeavor (unheard of for a woman): to pen an adventure novel, using a nom de plume, about a feisty female character.

Visit the author's website for more about her books.