Went to the outdoor pool at the gym today. Glorious, and not too busy. Got swim exercises and some reading done. Trying again tomorrow in between watching soccer games on TV. 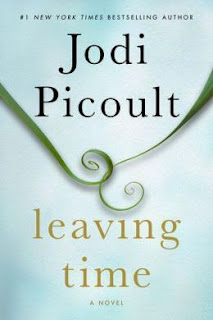 I have finished reading the newest Jodi Picoult book, Leaving Time, to be released October 14. Thanks to the publisher for sending an Advanced Reader's Edition. Here are the comments I posted on Goodreads, which did not give away the crucial elements of the plot, as the author has requested:

My first Jodi Picoult book. How lucky to have read this one as my first. Part mystery, part science, it's mainly a novel about close but sometimes tenuous mother-daughter relationships that are mirrored in the animal world - among wild elephant herds, the bond between these animal mothers and daughters last all through their lives. Extremely moving on the human level, this novel is also a plea to help elephants abused in captivity or prevent their slaughter by poachers who sell their ivory.

The novel is engrossing, with believable, sympathetic, and captivating human (and animal) characters. The plot has surprises as it goes along - one of the marks of  excellent writing.

I later realized I had read an earlier Picoult, Songs of the Humpback Whale, which I also liked. I gave Leaving Time a 5 star rating and highly recommend it. It caught my attention as soon as it arrived in the mail and I read it right away!

Also on my To Be Read list of new books are:

Once Upon a Time in Rio by Brazilian playwright, Francisco Azevedo, a novel about three generations of a family whose kitchen contains the secret ingredient for happiness. Published June 24, 2014 by Atria Books.

Vertigo 42 by Martha Grimes - the inimitable Scotland Yard Superintendent Richard Jury returns in the 23rd in the detective series. This one has "literary references from Thomas Hardy to Yeats," a sure draw for lovers of mystery and literature. Published June 3, 2014 by Scribner.

Mr. Mercedes by Stephen King goes in a new direction. This one is a thriller, not horror, in which three unlikely heroes "try to stop a lone killer from blowing up thousands." Since King is a master of the art of writing, I have high hopes for this one. Published June 3,2014 by Simon & Schuster.

I Stand Corrected: How TEaching Western Manners in China Became Its Own Unforgettable Lesson by Eden Collinsworth is "a fusion of memoir, manners, and cultural history from a successful businesswoman well versed in the unique challenges of working in contemporary China." I am also looking forward to reading this one. Publication October 7, 2014 by Nan A. Talese

A Dangerous Fiction by Barbara Rogan. It's intriguing as a mystery involving literary agents and demanding and sometimes vengeful? unpublished writers.We'll see who the culprit of some nasty tricks turns out to be.....The book was published July 25, 2013 by Viking Adult.

I'll be reading The Sea Garden by Deborah Lawrenson for a book tour early July.

Email ThisBlogThis!Share to TwitterShare to FacebookShare to Pinterest
Labels: A dangerous Fiction, I Stand Corrected, It's Monday, Leaving Time, Mailbox Monday, Mr. Mercedes, Once Upon a Time in Riom, Sunday Salon, Vertigo 42

Somewhere Only We Know said...

I have yet to read Jodi P or Stephen King. Hope you have a great week!

You have some interesting books on your list to read. I'm looking forward to your thoughts on A DANGEROUS FICTION. Reading by the pool sounds enjoyable. Hope you have a great week.

I haven't ever read anything by Jodi Picoult or Stephen King. King's thriller sounds like it might be a good first book for me. Come see what I got this week at Ms. Martin Teaches Media and Inside of a Dog. Happy reading!

I have only read King's Horror books but I believe that he has expanded out into other genres over the years. I am curious as to what you have to say about this one when you are finished.

I really have to pick up Mr. Mercedes because..well duh! It's Stephen King :D

Have a great week!

I'm not big on horror now, but loved Stephen King when I was in college. Think I'll give Mr. Mercedes a try!

I had no idea Jodi Picoult had a new book coming out. I've read one of her books so far, and ever since have been meaning to read more by her. This one might be a fun one to pick up next.

I didn't know the new Picoult was about elephants. My family loves them and has the utmost respect for their intelligence and social order, similar to our own.
I have read most of the Picoult books and always enjoy them, and some King over the years, not so much into horror, but his others are good reads for me! Enjoy!

I didn't know the new Picoult was about elephants. My family loves them and has the utmost respect for their intelligence and social order, similar to our own.
I have read most of the Picoult books and always enjoy them, and some King over the years, not so much into horror, but his others are good reads for me! Enjoy!

I didn't know about JP's new book! Enjoy your pool side (and "other side") reading, Harvee! Mr. Mercedes sounds excellent.

I can't wait for the new Jodi Picoult...hope I can get an ARC before October.

I have enjoyed all of her books, but some more than others. Lone Wolf was my least favorite.

Have a great week! Here's MY WEEKLY SUNDAY/MONDAY UPDATES POST

I hope Mr. Mercedes lives up to your high hopes for it. Though it probably will because Stephen King is such a great author.

I have A Dangerous Fiction on my TBR stacks and really need to get at it.

Have a great week!

Balance your spiritual energy and get in harmony with your soul by practicing these Radha-Krishna meditations.


Sri Gita Govinda
-A book written in the 12th century, this is a description of the intimate loving affairs of Radha and Krishna
http://www.mediafire.com/view/keqr4lqp7wr1rru/Sri_Gita_Govinda.pdf

Ananda Vrindavan Campu
-This is probably the most poetic and intimate portrayal of Sri Krsna’s life in Vrndavana that has ever been written.
http://www.mediafire.com/view/k9j3ldwbt17be3b/Ananda_Vmdavana_Campu.pdf

Prayers of Service to Radha and Krishna (Sankalpa Kalpadruma)
http://www.mediafire.com/view/lvkqsro3sbzm249/Visvanath_Cakravarti_Thakur_Sankalpa_Kalpadruma.pdf


And the following four are taken from Visvanath Cakravarti's Camatkara Candrika, a 300 year old scripture that talks about the love meeting of Radha and Krishna:

The Meeting in the Box
http://www.mediafire.com/view/c81a7cp43n5v6aj/The_Meeting_in_the_Box.pdf

The Meeting of Sri Krishna Disguised as a Female Doctor
http://www.mediafire.com/view/hgomrnem7829pda/The_Meeting_of_Sri_Krsna_Disguised_as_a_Female_Doctor.pdf

The Meeting of Sri Krishna Disguised as a Female Singer
http://www.mediafire.com/view/gyuboduhn8dvdml/The_Meeting_of_Sri_Krsna_Disguised_as_a_Female_Singer.pdf

The Meeting of Sri Krishna Disguised as Abhimanyu
http://www.mediafire.com/view/911h9qoxn4ca027/The_Meeting_of_Sri_Krsna_Disguised_As_Abhimanyu.pdf


And lastly, we have a very amazing scripture which describes the 24 hour daily loving affairs of Radha and Krishna in Vrindavan, called Bhavanasara Sangraha. This book is now available on Amazon for Kindle, for only $3.49

The above book can also be read on your PC using Amazon Kindle for PC, download here for free:
http://www.amazon.com/gp/feature.html/ref=kcp_pc_mkt_lnd?docId=1000426311

Disclaimer: We are not affiliated with ISKCON in any way whatsoever. ISKCON, or "The Hare Krishna Movement" as it's popularily known, is a radical and extremist distortion of the original Radha and Krishna dharma from ancient India. The author of the above book Bhavanasara Sangraha is no longer affiliated with ISKCON either, having cut all ties to ISKCON a few years ago.

I've only read Picoult and while I didn't care for that one I like the premise of this one better. The King looks interesting and I've somehow never read a King! Not sure how that happened. I'll be interested to see what you think of Vertigo 42. I had read a number of Grimes' earlier books probably 15 years ago and had really loved them. This one I wasn't so sure about.

A little bit of Jodi Picoult lasts me a long time, but I'm glad you liked this one. The element of animals in the natural world mirroring relationships is an appealing one to me. The kitchen in Rio book sounds wonderful, reminding me of Like Water a For Chocolate by the sound of it. Perhaps you might like to read it for Stu and Richard's Spanish Lit Month this July? Perhaps I might read it for Spanish Lit Month! :)

I love Jodi Picoult's books! I haven't read one in a long time and this sounds really good.

Hope you have a great week! Happy 4th!

Rita and everyoe: the new Picoult is more than about elephants. There is a mother-daughter story that goes with it, about a teenager looking for a missing mother. The author has asked that we don't reveal the ending or crucial parts of the plot, so I was being cautious about going into the plot too much.

Once Upon a Time in Rio caught my eye. Hope you enjoy it and all your new books!

I've read a few Picoults and they almost always have something quirky about them. The last I read was about wolves, so I'm not too surprised shes now looking at elephants. :)

I haven't read Picoult or King but I know they have a lot of fans (my husband is a King fan). I'm glad you enjoyed Leaving Time!

That's quite a nice mix of books. The swim sounds fun, and Happy 4th, a little early!

I love swimming and haven't done it for ages - you just reminded me how much I actually miss it.
I did read Jodi Picoult before, I'm sure, but can't remember the title. And the Stephen King is a must for me as a fan, will get it on my next trip to the book store.
Peggy @ The Pegster Reads

I have lots of Picoult novels. I like her.

I am gonna check out your books! Have a wonderful reading week!

I'm gonna have to look up A Dangerous Fiction, that sounds intriguing. Enjoy!

Lucky you for the Picoult! I'm looking forward to it coming out Down Under.

Wow lucky you with the Picoult book. I have read all of her books but guess I'll have to wait for this one;) glad u liked it

I am interested in Leaving Time, she is such a good author.

Great to hear your first Jodi Picoult book was good.

ENJOY the rest of your books too. I will pass on the Stephen King book. :)

Have a great reading week.

I commented yesterday but wanted to give you the link to my Monday post. Come see my week here. Happy reading!

I have given up temporarily on Picoult. I found her last read tough going. Have a good week.

Ooh, sounds like you had a lovely day! There's little better than sitting by the pool and reading. :) I've never read Jodi Picoult, but glad to hear you enjoyed her book so much!

I haven't heard of this Picoult and I've read most of her books. Glad you liked it. Something to look forward to!

Leslie (Under My Apple Tree) said...

Nice list. I have Mr. Mercedes in audio - hope it lives up to my high expectations!