Book Review: Blade of the Samurai by Susan Spann

When they had almost reached the end of the block Hiro asked, "Did you think I wouldn't reveal you as the murderer? Or did you just think yourself too smart to be caught?"

"I did not kill Saburo," Kazu muttered through clenched teeth. "I swear it on my honor." (ch. 25)

The second book in the series, a stand alone mystery novel, begins much as the first, Claws of the Cat. Master ninja Hiro Hattori and Father Mateo, the Portuguese priest he is sworn to protect, in sixteenth century Kyoto, are called on by the shogun to solve a murder, which they must do or forfeit their own lives.

In Blade of the Samurai, Hiro suspects his own kinsman, Kazu, of the death of Saburo, who was killed with Kazu's own sword in the shogun's palace. Politics is heavily involved, Hiro surmises, as there are opposing clans and groups plotting to overthrow the shogun. But who exactly are the guilty parties in this case, among so many potential suspects?

I enjoyed this second book as much as the first - the unusual main characters - a ninja (shinobi) investigator and a Portuguese Jesuit priest, the historical setting, the involved customs and politics of sixteenth century Japan, the role of women, and the code of the samurai and the ninja. Also intriguing are how Hiro and Father Mateo go about their investigation, the people they interview, and the clues they put together to arrive at the surprising conclusion. Well written and plotted, this is an exciting new series for me! 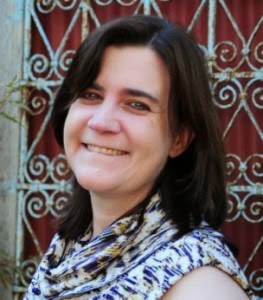 Susan Spann is a transactional publishing attorney and the author of the Shinobi Mysteries, featuring ninja detective Hiro Hattori and his Portuguese Jesuit sidekick, Father Mateo. CLAWS OF THE CAT was named a Library Journal Mystery Debut of the Month. Susan has a degree in Asian Studies and her hobbies include cooking, traditional archery, martial arts, and horseback riding. She lives in northern California with her husband, son, two cats, and an aquarium full of seahorses. Visit her website.

Thanks to TLC Book Tours and the author for a review copy of this book.
For other reviews, check the book tour schedule.


GIVEAWAY: The publisher is offering an ebook or a hardcover copy of The Blade of the Samurai. Please leave a comment here or via email to harvee44@yahoo.com Winner will be chosen at random on August 16 and notified by email. U.S. and Canada only, please.