Book Review: Us by David Nicholls 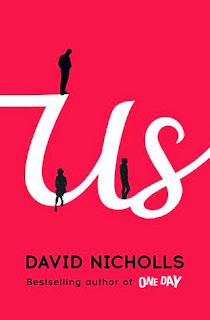 Douglas Petersen understands his wife's need to 'rediscover herself' now that their son is leaving home. He just thought they'd be doing their rediscovering together.So when Connie announces that she will be leaving, too, he resolves to make their last family holiday into the trip of a lifetime: one that will draw the three of them closer, and win the respect of his son. One that will make Connie fall in love with him all over again.The hotels are booked, the tickets bought, the itinerary planned and printed.What could possibly go wrong?

This novel will be released soon. I have already read the preview edition and can't recommend it enough.

My comments: Douglas, a "nerdy" and rigid biochemist tries to save his strained marriage and reconnect with his teenage son during a month-long Grand Tour of Europe. His wife, Connie, a much freer spirit then he, wants to return to her art and the freedom she had as a single woman twenty five years previously. Their son Albie, soon to be a college student, seems estranged and uncommunicative with his father.

The adventure in Europe changes Douglas and exposes him to new experiences and people that open up his previously narrow view of life. It changes the family dynamic as well. The ending is a surprise one.

My rating: 5 stars. Great plot about family dynamics; wonderful characterizations. Grab this book as soon as it's published!

I received an advance edition of this book for review.
at September 24, 2014

Oooh Great Pick! I haven't heard of this one yet. I love finding new books on people's posts.

I'm looking forward to this one too - I loved One Day! For some reason I thought it was coming out later in the fall. I didn't have an ARC, so just pre-ordered it. Glad to hear it's great!

OK, this is weird...Amazon is saying Oct 28 for the Us release. I'd also seen October 11 earlier this year.

Do you know what the deal is?

Sarah, I must have accessed the British edition of the book. Harper Collins will publish the hardcover, the Kindle edition, and the paperback in October I'll have to change my info on the post.

Harvee, I tried to post a comment here earlier, to no avail. I will try again. This book sounds very good, and I hope to read it.

A well written story about relationship[s can be so meaningful as well as an intriguing read. This might be one of those books.

If you decide to read it and post commentary I will be very interested in reading your thoughts.

Brian, I did read it and rated it a 5. My comments weren't clearly marked in the post as mine, so I fixed that!

I want a trip to Europe that will change my life! Barring that, I'll just have to read the book, I guess.