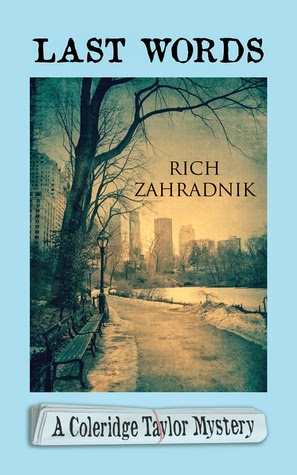 
The dead sitting on his desk could wait.
Instead of going back to the office, Coleridge Taylor stopped at the newsstand on 23rd Street and looked at the front page of the daily news. MAYHEM IN QUEENS spelled out in two-in ch type. Another story that should have been his. The Times led with a dull speech by President Ford. It made him mix Nixon. Nothing like a crook in the White House to sell papers. He spent a nickel on a pack of Teaberry gum, folded a stick into his mouth, pulled his field jacket tight against the wind, and turned east toward Bellevue.


"Does he fight with your husband a lot?"
"He fights with everyone a lot. Me. Con. His teachers. He's smart. Too smart for his own damn good....

Book description:
"In March of 1975, as New York City hurtles toward bankruptcy and the Bronx burns, newsman Coleridge Taylor  is looking for the story that will deliver him from obits, his place of exile at the Messenger-Telegram. Ever since he was demoted from the police beat for inventing sources, the 34-year-old has been a lost soul.
A break comes at Bellevue, where Taylor views the body of a homeless teen picked up in the Meatpacking District. Taylor smells a rat: the dead boy looks too clean, and he's wearing a distinctive Army field jacket. A little digging reveals that the jacket belonged to a hobo named Mark Voichek and that the teen was a spoiled society kid up to no good, the son of a city official.
Taylor's efforts to protect Voichek put him on the hit list of three goons who are willing to kill any number of street people to cover tracks that just might lead to City Hall. Taylor has only one ally in the newsroom, young and lovely reporter Laura Wheeler.  If he doesn't wrap this story up soon, he'll be back on the obits page--as a headline, not a byline.

Last Words is the first book in the Coleridge Taylor mystery series."