Book Review: Aground on St. Thomas by Rebecca M. Hale 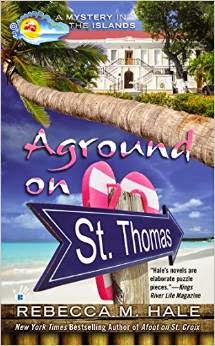 This was an unusual cozy as it involved local politics on St. Thomas Virgin Islands and St. Croix, a fictitious story, of course. The governor of St. Thomas is in hiding from U.S. forces which have landed to take over the government in the wake of massive island corruption. The story line is based on a true story of the British invasion of the Turks and Caicos Islands some time ago for similar reasons..

Interesting, unusual. I'd recommend it for a light read that takes you to the island setting and its atmosphere.

Book description:
The tropical paradise of St. Thomas is shut down as the FBI seizes control of the island to apprehend government officials on bribery charges. Tourists and locals are stranded until FBI agent Gabe “Friday” Stein can find the missing governor and two senators who have eluded capture.

Innocent of any crime, Senator Julia Sanchez can only escape wrongful arrest with the help of eccentric Senator Bobo. As they try to blend in with increasingly hostile locals and make their trek across the island to safety, Senator Sanchez is only just beginning to realize the extent of the corruption behind the island’s idyllic façade. (goodreads)