Book Review: Secrets of a Thousand Beauties by Mingmei Yip 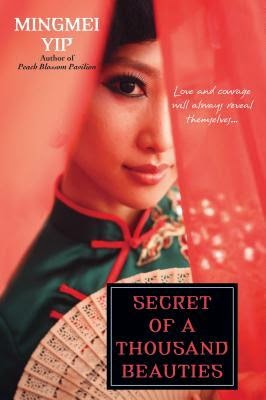 It was my wedding day.
I was horrified.
Because my soon-to-be-lawful - and awful - husband was not even a man.
He was a ghost.

"Now, watch carefully - I am going to use the 'wandering stitch' to show the mane of a galloping horse."

My comments: On the day of her wedding as a ghost bride, Spring Swallow escapes from the family whose son she is betrothed to, a son who has died. Rather than live her life as as a widow in the home of a dead husband's family, she escapes to find a new life. She joins a group of embroiderers led by Aunty Peony, a woman who was once an embroiderer in the court of the Emperor.

The novel is told from Spring Swallow's point of view, but the story is also about Aunty Peony who once decorated the Emperor's robes with skillful and elaborate embroidery art, but who is now trying to piece together a living on her own. Aunt Peony's story is a sad one, reflecting the perilous and uncertain position of women during the Qing Dynasty and after its fall. In contrast, the younger woman Spring Swallow finds her way in a new era after the fall of the dynasty.

Intriguing historical setting and information about the centuries old art of embroidery in China. The author brings this art to life in her historical novel while telling the stories of these two women, Aunt Peony and Spring Swallow. An interesting novel, recommended for those interested in traditional culture and the arts in Chinese history.