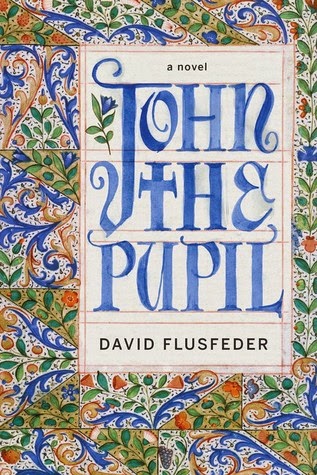 
...and see your face on the roof of the friary. Sometimes you would cast your eye down at us and we would scatter. More often, the face would disappear as if it had never been there at all, as if you were something we had conjured to frighten ourselves with. He was a prisoner, it was said, convicted of monstrous crimes. He was mad, he fed on the flesh of children, he wiped his mouth with his beard after he had done feasting. He was in league with the Devil, he was the Devil, performing unnatural investigations. Sometimes we would hear inexplicable thunder from the tower, a few claimed to have seen lightning on clear sunny days. Once, I myself,grazing my father's goats, I was touched by a rainbow, slowly turning, painting the field with brief marvellous colour.

As I got older, I would go there less often. The grass grew higher by that part of the Franciscans' wall. Strange flowers bloomed. Animals refused to graze there.

This novel is described as "...recounting the journey taken from Oxford to Viterbo in 1267 by John and his two companions, at the behest of the friar and magus Roger Bacon, carrying a secret burden to His Holiness Clement IV."

Hmm, I'm not sure about this one. Will keep an eye out for your review and you can help me decide :)

Hmmm that was my first thought. I will have to wait and see. :-)
sherry @ fundinmental My TT

I'm curious. The writing is wonderful and grabbed me right away. Honestly, the first thing that popped me in my head was something from The Hunchback of Notre Dame. Thanks for sharing.
My TT - http://fuonlyknew.com/2015/02/10/teaser-tuesdays-101-night-carnival/

Doesn't seem like my kind of read, but it also piques my curiosity. Thanks for sharing...and here's mine: “ONE PLUS ONE”

This is descriptive and intense, and the cover looks like an illuminated manuscript. I'd read more!

I don't know about this one. It seems kind of dark. I'd read a few pages though. I'm curious about the time period.

I don't think this one is for me, but hope you enjoy it!

An arresting opening, I like it but not sure the book is for me. Hope you enjoy!

I don't know if I would read more or not -- very different.

oh, that is very mysterious. I think I'd read a bit more anyway. Kelley at the road goes ever ever on

Oh yes, I would definitely read further. I like to learn about monks in mysteries, etc. The illuminated manuscript on the cover is pretty too.