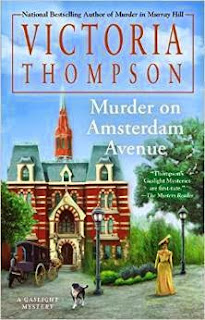 Murder on Amsterdam Avenue by Victoria Thompson
To be published May 5, 2015; Berkley
Genre: mystery


"Charles Oakes is dead."
Sarah looked up at her mother in surprise. They were sitting at her kitchen table, and Sarah had spent the last half hour bringing her mother up to date on the arrangements she and her fiance, Frank Malloy, had decided upon for their wedding and their future life. She hadn't expected to hear about a death. "Is Charles the son? The one who was a few years older than I?"
"Sadly, yes."

Book description:
Midwife Sarah Brandt and Detective Sergeant Frank Malloy investigate foul play in the secretive high-society world of nineteenth-century New York City… Sarah and Frank soon learn that not everyone wants to know more about Charles’s death, particularly if he was murdered. As they unravel secrets that reach back to the War Between the States, they also discover that they are in the company of a very present danger…

So, would you read on?

I do like the opening lines...and this one looks like a great cozy mystery. Thanks for sharing...and here's mine: “THE GUEST COTTAGE”

I like that it's set in the 19th century too, Laurel-Rain!

As said elsewhere today, I like a good cozy and the setting and time period of this sound great.

That's another good appeal for me - the historical aspect, Beth .

Oh, yes. I know this is a series that I've meant to read and it has been around for quite a while. I'd keep reading. :-)

I may not have read the others, Kay, but I will enjoy this one!

I'd probably want to keep reading. I have never read a cozy about a midwife.

Good point, Vicki. Neither have I.

I actually read the first book in this series and enjoyed it. Then I won a copy of a book much later in the series that I don't want to open because of spoilers in case I go back and read the whole series in order. Glad you enjoyed it and it reminded me to try this author out again.

I haven't read others in the series, but I'm willing to start with this one, Margot.

I assume that each book, even in a series, can be read as a stand-alone work. Too many novels to read to catch up, so I'll start with this one, Rita.

I have several books from this series on my shelf but for some reason have yet to read any of them. Sounds like a good one!

Nice that you have books in the series. If you ever do read them, let us know what you think!

I'd read more of this cozy! The first paragraph draws my interest.

Am hoping its so all the way through, Freda.

It does start off with a bang, Suko!

I would keep reading. Enjoy.

I would definitely keep reading. I've been wanting to start this series for a long time.

I would keep reading as well. I like it.

I'll have to start it soon!

Hope you let us know how you like it once you start, Yvonne.

Great opening paragraph. It catches a lot of readers.

This is an opening that is right within its genre - I do like a good cosy mystery. Here is my Tuesday post https://cleopatralovesbooks.wordpress.com/2015/04/21/first-chapter-first-paragraph-april-21/

I must admit that I like a book to begin a slightly slower pace. I would prefer that the main premise of a book not be thrown out so fast.

The opening line made me want to know who he was, though I agree with you Brian, in general about first paragraphs.

I would keep reading. I like the author's writing style and am already interested in where the story will go next.

Glad it grabbed your interest!