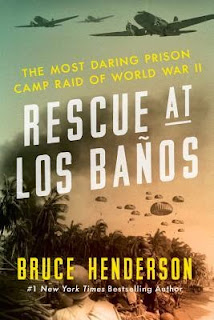 Rescue at Los Banos: The Most Daring Prison Camp Raid of World War II by Bruce Henderson
Published March 31, 2015; William Morrow
Book description:
The  true story of one of the greatest military rescues of all time, the 1945 World War II prison camp raid at Los Banos in the Philippines--a tale of daring, courage, and heroism that joins the ranks of Ghost Soldiers, Unbroken, and The Boys of Pointe du Hoc.


Benjamin Franklin Edwards, a mechanic with Pan American Airways for less than a year, arrived in Manila aboard the airline's famed "China Clipper" on October 2, 1941. The big Martin M-130 flying boat was known by Pan Am employees as "Sweet Sixteen" (NR 14716) and had been the first seaplane delivered to the airline and the first to fly scheduled air service across the Pacific. It touched won on Manila Bay and taxied to the ramp at Pan Am's Cavite base eight miles southwest of the Philippine capital known worldwide as the Pearl of the Orient for its picturesque seaside location, tropical beauty, and golden sunsets from the shoreline of its enchanting bay.


Muller wondered how he was going to gather intelligence against the Japanese. It was a G-2's worst nightmare. Muller understood the average soldier might not see much of a difference between fighting the Germans and fighting the Japanese; both were dangerous and disciplined foes. But there was a big difference when it came to gaining accurate intelligence for the division's battle plans.


World War II is always fascinating, especially in the Pacific. I'm eager to read it for a chance to learn more.

Thanks to the publisher for a copy of this book for possible review.

I am also fascinated by stories from the WWII era...this one sounds different from the ones I've been noticing lately, so thanks for sharing. Here's mine: “EAT THE DOCUMENT”

This sounds fascinating! I'm surprised I haven't heard of it so thank you for sharing it! The good thing with this book is my husband would love it too. Adding to my TBR!

Harvee, this does sound like a fascinating book! I look forward to learning more about it.

I agree with all three ladies on the fascination... I normally stay away from books with war, but am intrigued by this one.
Happy weekend!

Allied prisoners in the hands of the Japanese were subjected to terrible abuse and atrocities. This particular story is one that I am not familiar with.

I look forward to reading your complete review.